Sound Travels this week is examining the greatness of one of reggae's greatest producers/artists, the ever-eccentric genius of Lee "Scratch" Perry. As I said yesterday, I will say again and again, the Lee "Scratch" Perry story is in many ways one of the narratives that defines reggae itself. For a period however, Lee Perry was the MAN; a producer in high demand and an artist in his own right capable of composing hits for himself.

Perry's skills in the studio are perhaps what set him apart. After a brief apprenticeship for the almost equally legendary Joe Gibbs, Perry set himself up in his own studio known as Black Ark Studio. While there, he would pioneer techniques that would set dub apart as its own "thing," its own entire genre of Jamaican music. That he did this on some pretty basic equipment speaks volumes about his creativity. 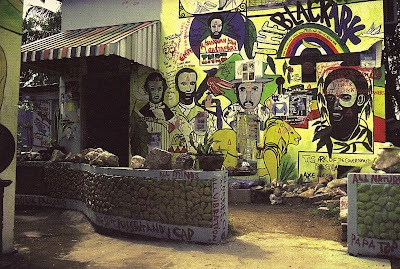 Sonic sleight-of-hand and studio trickery were Perry's trade. He brought the bass to the fore and liberally used tape-echo and layers of reverb to achieve a dark, "dubbed-out" sound. His studio mastery brought a lot of talented artists to Black Ark, most notably a young Bob Marley. Perry was the one who helped refine Marley's sound and launched his career into the stratosphere. Perry also helped define the music of many others and I played a few for you today. Peep these if you want to explore more of the sounds that made Lee "Scratch" Perry great.