More music from the late, great Fela Kuti today on Sound Travels. Yesterday, we heard music from his brief, unauthorized visit to the U.S. in 1969 and today, I wanted to pick up that thread and play music from right after his and the band's expulsion after being ratted out in L.A..

Although Fela would record his own album with longtime friend and Cream drummerGinger Baker, I really love the one he did for Baker, and is nonetheless another example of what kinds of music Fela was producing during his London phase.

Ginger Baker "Tiwa (It's Our Own)" Stratavarious

This is from Fela's second studio album, right before the crystalization of thought led to his renunciation of the Ransome part of his name. Open & Close is apparently about a dance and represents a period where Fela was still writing songs less about politics and African unity and more about fun things 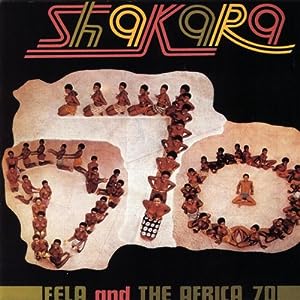 By 1972, Fela had dropped one of his most well-known songs "Lady" on the Shakara EP. An Excellent release that features his newly re-named band Africa 70. It also comes at a period where his experiment toward communal living, the famed Kalakuta Republic was happening and the founding of the Afro-Spot, a venue that showcased him and his band was opened; the same venue that would later become the famous "Shrine." Overall, his music was becoming political and the social commentary of "Lady" is scathing, denouncing Westernism and showing the profound effect the Black Power Movement in the U.S. had affected him.