Before these two new albums, vintage recordings from Sudan and Somalia were rare

Before these two new albums, vintage recordings from Sudan and Somalia were rare 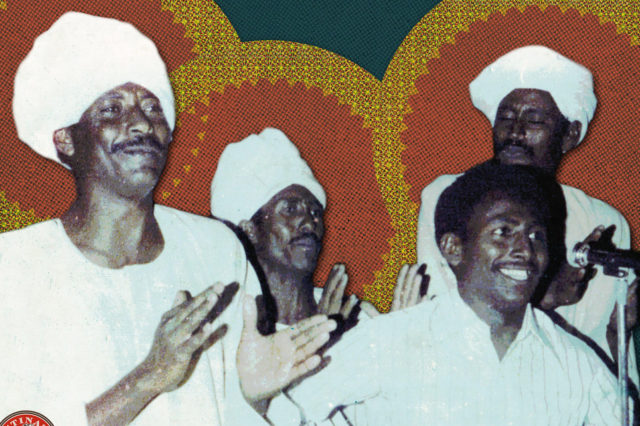 German record label, Analog Africa specializes in old-school African sounds. It has a collection of compilations that at each stop, really give you an access point into various old scenes from numerous countries.

This year, Analog Africa founder Samy Ben Redjeb teamed up with John Beadle, a Milwaukee-based musicologist and owner of a blog I’ve used as inspiration for years, Likembe. They met after John had uploaded a cassette he had been handed 20 years earlier by a Somalian student. The post was titled “Mystery Somali Funk.” When Samy found it, he called it “some of the deepest funk ever recorded.”

The cassette seemed to credit these dense, sonorous tunes to another legendary Solmali outfit called Iftin. But initial contact with Iftin’s lead singer suggested that the “mystery funk” may have actually been the work of their chief rival, Dur-Dur, a young band from the ’80s.

Dur-Dur’s sound is like a lost relic of funky deliciousness of traditional Somali music mixed with whatever rhythms would make people dance—be it funk, reggae, soul, disco or even New Wave. These styles were mixed with distinctly local sounds like Banaadiri beats, Daantho and spiritual Saar music.

It initially seemed that Dur-Dur’s music had only been preserved as a series of murky tape dubs and YouTube videos, but after Samy arrived in Mogadishu, he eventually got to the heart of Mogadishu’s tape-copying network—an analogue forerunner of the internet file-sharing that helped to keep the flame of this music alive through the darkest days of Somalia’s civil strife—and ended up finding some of the band’s fabled master tapes, long thought to have disappeared. I, for one, am glad he found them. This is already one of my favorite re-issues of the year.

The other record label bringing lost East African music to the public is relatively new, at least to me. It’s Ostinato Records, a Grammy-nominated label that has thus far curated music from Africa and the diaspora. With releases from Haiti and Cape Verde, I was excited when the label started digging into Somalia with their 2017 compilation “Sweet As Broken Dates: Lost Somali Tapes from the Horn of Africa,” which the BBC called “A mega mixtape of Somali classics.”

On their return to East Africa they finally cracked a country I really had nothing much to show from my own digging—Sudan. Much like Somalia, it’s a war-torn nation whose nascent recorded music scene had been seriously compromised by regional strife to the degree that original recordings were similarly scarce. The promo video for the superb “Two Niles to Sing a Melody: The Violins & Synths of Sudan” compilation offers ample background…

There was a time when the music of Sudan and Somalia was hard to find, at least in the U.S. But this year, the search for those vintage lost lineages of music has unearthed two new albums.

As a music digger who focuses on global sounds, I had “found” music from Sudan and Somalia in the past, but that level of familiarity got a boost this year due to the diligence of a pair of record labels who are making it their business to get the word out on some really cool sounds.

The record is especially mind-blowing in that context and I bonded with it like long lost kin. Although Sudanese styles are endlessly diverse, this compilation celebrates the golden sound of the capital, Khartoum.

Each chapter of the cosmopolitan city’s tumultuous musical story is covered through the 16 tracks—from the hypnotic violin and accordion-driven orchestral music of the 1970s that captured the ears and hearts of Africa and the Arabic-speaking world, to the synthesizer and drum machine music of the 1980s, to the music produced in exile in the 1990s. The deep kicks of tum tum and Nubian rhythms keep the sound infectious and leaves me wanting access to more recordings from this corner of the world.