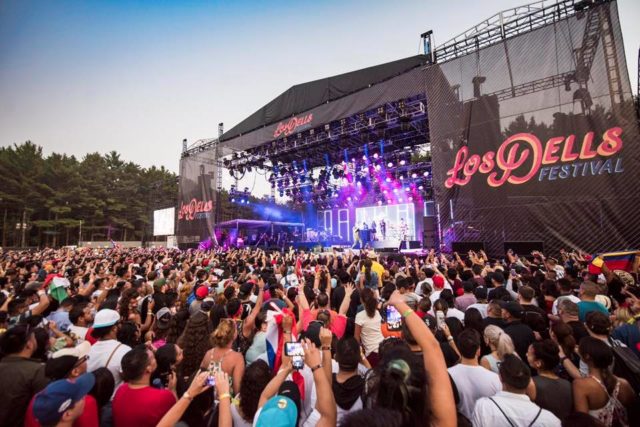 Don’t look now, but Wisconsin is staking its own claim on the Latin music scene as Los Dells returns to the Wisconsin Dells for another two-day power play in support of the claim that it’s one of the best Latin music festivals in the nation. Though it may not have the same profile as Coachella, it does boast a very expansive and diverse lineup of Latin music in its many forms. For lovers of global sounds and Latin music, the long Labor Day weekend is a perfect time to make a late summer getaway to Wisconsin’s lake country.

This year’s headliners are reggaeton superstar Ozuna and rap star Logic. Ozuna writes hits (43 in the last year alone!) and is YouTube’s most-watched artist globally. Logic, a name you probably already know, has had a number one album for three years running. The undercard is as deep as it is interesting with vallenato and cumbia-pop musician Carlos Vives as well as must-see Mexican rockers Café Tacvba and rising Puerto Rican reggaeton-trap artist Farruko.

Los Dells Festival has such an eclectic roster of artists that reflect Latin culture; from trap to rap and regional Mexican (El Fantasma), from rock and Latin alternative (Café Tacvba, Los Walters, Natalia Lafourcade, Quitapenas) to vallenato, reggaeton (Ozuna, Farruko) and merengue (Elvis Crespo), and from pop music (Sebastian Yatra, Jessie Reyez, Jesse & Joy, Salt Cathedral) to R&B and soul to reggae (Gondwana). There really is something for everybody.

Situated on 1,500 acres in Mauston, Wis., Los Dells picked a pretty spot to post its tents and is a close shot to all the other family-friendly fun the Wisconsin Dells has to offer. For my money however, I wouldn’t skip Los Dells which boasts some of Latin music’s biggest names in urban, regional Mexican and alternative sounds. The three-stage festival takes place in the middle of the forest and is the only Latin festival in North America that offers full camping capacity (showers, restrooms, convenience store, security).

Pump yourself up for this year’s festival with this playlist of featured performers.