Who needs a top 10 when you can get 12? More is better on Sound Travels, and I scour the world for sounds full-time, so you know I got some goodies. While we can't know what will become of the year in world music I can, and have asked myself what has been the best of 2014 so far? In this two-part first quarter report, I'll detail Sound Travels' faves for the year, starting with these six…

In the span of a few years, Chilean femcee Ana Tijoux has gone from unknown to relative unknown for her microphone prowess; no mean feat for a foreign-born hip-hopper rapping in her native Spanish. Although much more popular in South and Central America, Tijoux is a critics darling (NPR loves her, same with the New York Times) and has dared to take her skills to American audiences and largely succeeded by dint keeping it real.  She doesn't try to be who she's not, which is good because she's awesome as she is. Her latest album Vengo came out earlier this month and though it lacks a single as catchy as her 2010 debut 1977, it is even better than her sophomore release La Bala (which was dope btw). On it, she maintains her strident socio-political message fighting for rights of Chile's indigenous peoples and backs her raps with some potent beats with Andean flair. Similarly political singer Alsarah has had a busy year. Working (by singing) in the collaborative pan-national and multi-purpose Nile River eco-conservation Nile Project and fresh from the artsy and collaborative release she did with French beat-maker Débruit in late 2013, I'm happy she found time to release her own project Silt with her band the Nubatones. Happy, because it's that dope. So dope I got doubles, ON VINYL!

Truth be told though, this album is quite remarkable. Alsarah's affection for retro East African sound speaks like a soul from another era. Elegant only begins to describe the stately poise of her voice, singing classic soul sounds from an area of the world few here imagine. I'm excited enough about her album that I think she'll hit some heights, it's that unique and it's just that fresh. 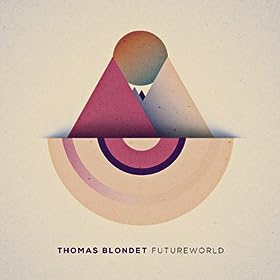 Blondet is the only name you'll find on this list that I actually started playing in 2013. His label released "Tu Va Partir" and "Un Amor" led into the full release earlier this month on Rhythm & Culture Music. FutureWorld is interesting album; if you had a blind taste test you might think you were hearing one of the best Thievery Corporation albums in years. FutureWorld is an album that somehow manages to be many things simultaneously; it is fascinatingly solid on cuts ranging in tempo from house to hip hop but that's not even what makes it pop. It's the way everything is grooved out on Middle-Eastern, Balkan and bhangra melodies, all with a range of reggae-dub basslines underwriting the whole thing. FutureWorld also entertains with an exotic variety of good-yet-unheralded singers like Tina C and Leila Chatti and collabs with soundsytems like NYC's Subatomic Soundsystem crew.

The Souljazz Orchestra makes me seriously queston all my notions about Ottawa. I mean it's not like I had any really but this band is killing it. Pierre Chrétien and his crew's brand of impossibly shifty global funk is clearly cultivated with a cratedigger's ear, crafted with such an attention to detail and tightened around a variety of sounds in way that sounds neither forced nor flawed. Inner Fire dabbles fiercely and is an afrobeat, ethio-jazz, Latin excursion that verges on a spiritual jazz tip. Inner Fire, the band's fifth album is in my mind the least friendly and also it's best. Most of the songs here are unapologetically instrumental and built to groove.

Deadbeat, aka Scott Monteith, has been producing some of the best of digidub for a while. Reggae for the techno scene is one way to describe it but I think 'Digidub' is the best way to describe his rootsy and rhythmic techno laced dub beats. On The Infinity Dub Sessions, he's teamed up with long-time collaborator Paul St. Hilaire, aka Tikiman to produce an album that I've been enjoying since it dropped earlier this month. Infinity Dub Sessions is an album that works in headphones and on soundsystems alike, built for bass boosted listening and not in any in between. It's a layered, textured sound built on grooves locked into repetitive beats with Hilaire dropping some of his best minimal dub poetry throughout.

Peace And Love by deadbeat

Eve is the new release from Beninoise singer Angelique Kidjo and perhaps the most well known name on this list and also one of the most acclaimed African singers alive. Eve, Kidjo's 10th album is also a dedication in song to African women and their struggles in general. Singing straight from the heart, each song offering messages of upliftment, love and encouragement; in fact, women's voices dominate and define the album. A pop album, the album features some of Africa's amazing all-female choirs incorporated in a seamless, unpretentious way. It's an album you want to like just on story alone, but give it a listen, it's dope.