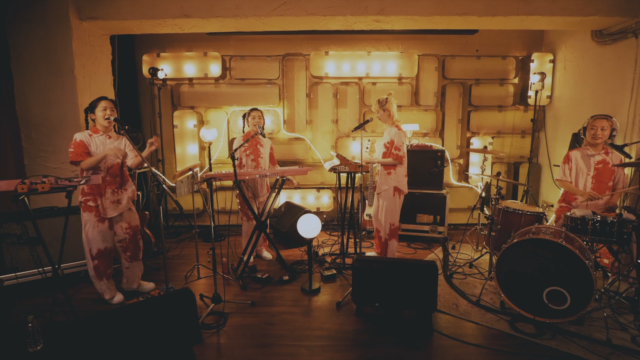 Before bands start going on world tours of their own, 88Nine is doing a World Tour of virtual sessions. In May we went to Nigeria with the Kuti family, and here we stop in Japan for a session with CHAI.

I first discovered CHAI at SXSW a couple years ago. At that festival a lot of it is word of mouth. After day one a bunch of my friends said, “You have to see this band, CHAI. They are all dressed up in bright pink concerts and it’s the most vivid set this year.” After day two with four more people insisting I see them, I caught their set and everyone was right. They blew the roof off the place. It was performance art along with incredible music. We get that mix here in this session that they filmed with us.

CHAI is a band made up of two sets of twins, Mana, Kana, Yuuki and Yuna. The just released their fantastic album, “WINK.” For this interview Mana and Yuuki joined us. My favorite part of this interview is after I ask about the new direction of the album. They went from pretty guitar based to a super vibey, 88Nine After Nine sound, and Mana broke from Japanese into English and says, “Our overall theme from WINK is that music is your friend. That friend is there when you’re crying and laughing and angry, shouting or can’t sleep. It’s music that comforts you. The music you can’t stop listening to and boosts your confidence. That’s the kind of music we wanted to create. And that’s what became WINK.”

She ended with a big proud smile and we all laugh with joy. That’s CHAI.