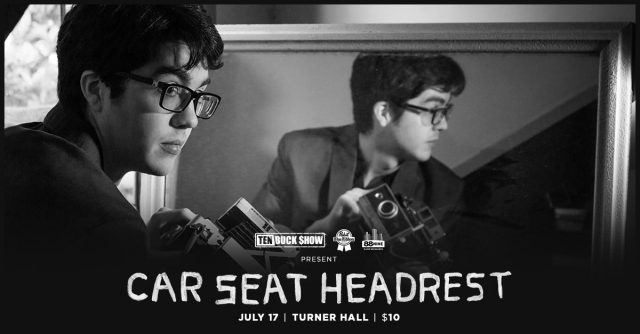 What: Studio Milwaukee Session with Car Seat Headrest
Who: Our top supporters who receive an invite via email (Find out about VIP Membership) & our on-air listeners
Where: Studio Milwaukee, 220 E Pittsburgh or ON AIR at 88.9FM
When: Sunday, July 17 @ 1:30 p.m.

Not a Member? Want to join us in studio? Click here for your chance.

With potentially the least flashy band name of 2016, Car Seat Headrest will make its way to Milwaukee for the very first time this weekend for a Sunday performance at Turner Hall Ballroom.

Man behind the magic, Will Toledo, used to write and record music in his car (hence the band name), and 2015’s Teens of Style is the group’s first studio recorded and produced album, though Toledo still prefers to record in car instead of at home. 2016 brought a cleverly rhymed follow-up album Teens of Denial and the track “Vincent” that we’ve been spinning on 88Nine.

We’re psyched to see these lo-fi fellas in action at our studio, and then follow them over to Turner Hall that evening (with Milwaukee band The Pukes opening!).