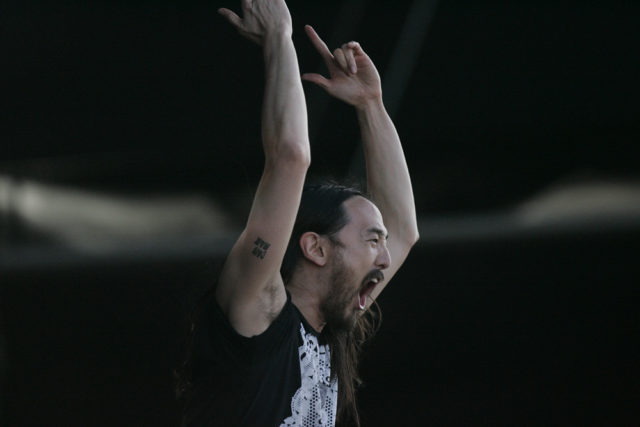 Every day during Summerfest, we’re rounding up the festival’s highlights and hidden gems and sharing Radio Milwaukee staff picks. Here’s everything you need to know about Summerfest’s opening day, including the complete lineup and how to get in for free, as well as the scoop on tonight’s Big Bang fireworks. (You can find Summerfest’s complete daily schedule here).

Few artists have embodied the massive, blown-out sound of contemporary EDM as well as Steve Aoki, one of the highest-grossing touring DJs of the 2010s. Last year he released his most recent album, “Neon Future III,” a star-studded affair featuring guests as wide-ranging as Lil Yachty, Blink-182, Lady Antebellum and Bill Nye (yes, the Science Guy). And as DJ Kenny Perez explains, for this show Aoki brought company — a lot of it.

Starting at 5 p.m., the Miller Lite Oasis stage will only host artists from their world-renowned Dim Mak record label. Led by the label’s fearless leader producer, businessman and resident foodie Steve Aoki, this evening will boast the festivals most energetic opening to date (IMO). Although the night will loaded with great music, I am eager to see what Max Styler does at 6:30 p.m. Max first caught my attention with a track called “Feel It” which I got a chance to play last summer on In the Mix. He is one of the youngest artists on the label and has been delivering future house sounds that cut right through. The energy this evening will be on 10!, so bring your earplugs and poncho because it may rain cake or pizza 😉

Longtime Radio Milwaukee listeners are probably familiar with Jay Matthes’ track “Good Lookin’ Woman,” a favorite we kept in regular rotation. It wasn’t too surprising, then, that Matthes filled our performance space when we welcomed him on 414 Live a couple of years ago. He’s got a gift for writing easygoing country and roots-rock tunes with just a hint of melancholy. Consider his 5 p.m. set at the Miller Lite Oasis the perfect excuse to leave work a little early today. And if you’re in a local frame of mind after his set, head to the Klement’s Sausage and Beer Garden stage afterward for Milwaukee legend Robin Pluer’s 6 p.m. set with the R&B Coquettes, a band that also features veteran Milwaukee musicians John and Mike Sieger and Bobby Schneider.

At the American Family Insurance House: Hanson and Walk The Moon

One of the most exciting new additions to Summerfest is the American Family Insurance House, which this year is hosting intimate afternoon performances and meet-and-greet sessions with some of the festival’s big headliners before they perform later at night. Credentials will be required for admission to each performance, and will be distributed each day at the American Family Insurance House on a first-come, first-served basis.

We’ll be honest: If you’re not a fan of country music, some of Summerfest’s country headliners can be hard to tell apart. But if you don’t follow contemporary country, just know that Thomas Rhett is one of the big ones, a performer who’s bridged the gap between country and pop on his recent releases. He’ll share the American Family Insurance Amphitheater with Dustin Lynch and Russell Dickerson. His latest hit, “Look What God Gave Her,” really isn’t all that far removed from something the Jonas Brothers might perform.

Summerfest may not book as much classic rock as it used to a decade or two ago, but old favorites still make up a considerable chunk of the festival’s lineup. Tonight’s notable classic-rock act is Foreigner, the big-haired power rockers behind some of the biggest rock ballads of the ’80s.

As we’ve written, it’s possible to get in to Summerfest for free almost every day if you’re willing to make the effort. Today is no exception. Today’s promotion is Johnson Controls Stomp Out Hunger Day. Anyone who arrives between noon and 3 p.m. and donates three non-perishable food items will receive one free admission ticket, valid for today only. Canned peaches and pears are especially appreciated, but all non-perishables will be accepted. Donation stations will be at all three gates, and all donations will benefit Hunger Task Force.

Play your cards right and you could leave the festival today with a free ticket, too. Summerfest opening ceremonies start at 5 p.m. at the recently remodeled Uline Warehouse Stage, and the festival will be giving away 25,000 free week day tickets following the ceremonies.

And don’t forget the fireworks

The forecast couldn’t be more perfect for tonight’s Big Bang fireworks show, which starts at 9:30 p.m. The fireworks will be taped and broadcast in high definition on WISN 12 at 10:30 p.m.