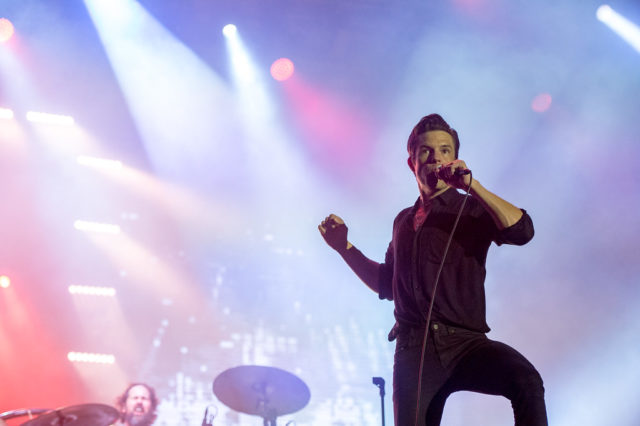 Every day during Summerfest, we’re rounding up festival highlights and hidden gems and sharing Radio Milwaukee staff picks. Here’s everything you need to know about the festival’s Friday, July 5, schedule (featuring The Killers, The Head and the Heart, Dashboard Confessional, Cole Swindell, 38 Special, T.I., Daya, Matisyahu and more) as well as promotions and the full lineup. (You can find Summerfest’s complete daily schedule here).

The Killers stormed alternative radio in the ’00s with hits like “Mr. Brightside” and “When You Were Young.” But unlike so many of their peers from that era, they never stopped delivering. Every album has been glamorously infectious, including their most recent effort, 2017’s “Wonderful Wonderful,” which featured a cameo from Dire Straits’ Mark Knopfler. After becoming the first band to headline Milwaukee’s new Fiserv Forum last year, the band returns to Milwaukee for more, joined by the always-reliable Death Cab For Cutie, a group similarly incapable of releasing a bad record. Let’s see if this show can live up to The Killers’ star-studded set at Glastonbury.

My pick for Summerfest is T.I. For me, T.I. gives me a little taste of my hometown of Atlanta. But more importantly, T.I. represents the true spirit of hip-hop. He evolved from a drug dealer to a major artist that help defined the sound of trap music to becoming an entrepreneur and investing in his community. That is probably, one of the reasons I really want to see him perform.He has become more than music. He has become an inspiration.

In a world of gentrification and wage gap disparities, T.I. is using is wealth and influence and give back to the community that gave him a chance to shine. In 2017, he started the real estate venture, Buy Back the Block. He has spent over $2 million dollars buy buildings and lots in his old neighborhood of Central Hill. He has plans to transform the neighborhood into affordable mixed housing, green spaces and places that provide healthy food options.

He is also investing in tech where African-Americans make up 7% of the U.S. tech workforce according to data collected from Bloomberg News. At the beginning of 2019, T.I. launched Tech Cypha, a new investment syndicate focused on early, growth, and late-stage startups. If that isn’t enough, T.I. is working with an Atlanta church to end mass incarceration. Any artist that shows this much love for their community, deserves my support whether it is enjoying their show at Summerfest or being inspired to help my community.

One of my favorite local acts, this duo of brothers somehow craft a well-balanced mix of darkness and light. Dark goth vibes meets sunny ’80s synth with a relaxed pop sensibility and smooth vocals. The group performs many of the synth parts live, sometimes with guitar and it’s amazing to hear the amount of sound coming out of just two people.

At the Miller Lite Oasis: The Head and the Heart, 10 p.m

As World Cafe’s Talia Schlanger writes, “The Head and the Heart’s latest album, ‘Living Mirage,’ is warm, open and definitely leans hard on the “heart” part of the band’s name. The band went to Joshua Tree in the desert to create the music. The trip was bassist Chris Zasche’s idea — he thought the wide-open landscape would give the member’s all a chance to start fresh and maybe see themselves differently.” We’re guessing those songs sound incredible live.

One of the greatest soul acts from Philly, a city that produced its share of them, The Spinners absolutely owned the ’70s with hits like “Could It Be I’m Falling in Love?” and “I’ll Be Around,” songs that sound as fantastic today as they did back then.

Though it isn’t officially branded “Throwback Friday” or anything like that, Summerfest is featuring an unusual amount of name headliners in afternoon spots today, and we’re here for it. Highlights including Jesus Jones at 4 p.m. at the Miller Lite Oasis, Berlin ft. Terri Nunn at the Harley-Davidson Roadhouse and Big Head Todd & the Monsters at the Briggs & Stratton Big Backyard at the same time, and for Black Crowes fans, Chris Robinson Brotherhood at 3 p.m. at the Uline Warehouse. Nice.

Johnson Controls World Sound Stage hosts the uplifting reggae star Matisyahu tonight. If you missed it, you can revisit his Studio Milwaukee session.

Today’s admission promotion: There isn’t one

Most days of the festival Summerfest offers a way to get in for free. Today is one of the rare exceptions.