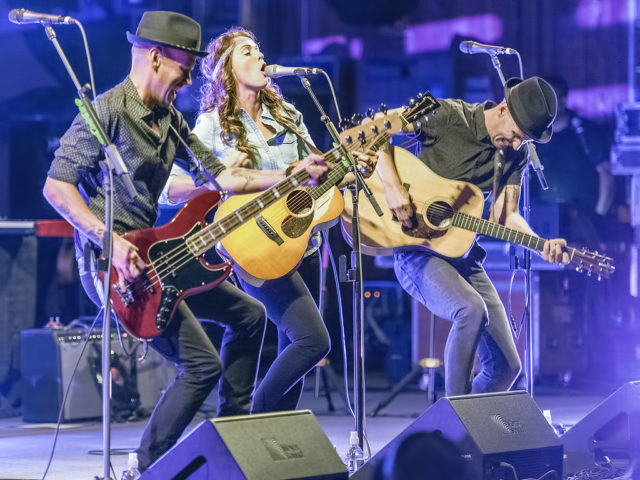 Every day during Summerfest, we’re rounding up the festival’s highlights and hidden gems and sharing Radio Milwaukee staff picks. Here’s everything you need to know about today’s stacked lineup, which features Brandi Carlile, The Lonely Island, T-Pain and more, as well as today’s promotions and the full lineup. (You can find Summerfest’s complete daily schedule here).

I’ve been a fan of hers since “The Story” in 2007. Although many of her recorded songs are quite melancholy, her live shows have the energy, uplift and joy of an old-time revival meeting, and everyone is welcome. She has a secret weapon in “the twins,” Phil and Tim Hanseroth, who play bass and guitar, respectively, and add incredible vocal harmonies. I never miss her when she’s in town.

If the lyrics don’t get you, the hooks will. It’s a combination I look for in indie-rock and The Beths really deliver. Coming all the way from New Zealand, you might think of early Kiwi acts like The Clean or bands on the Flying Nun label, but even more prominent are nods to contemporary influences like Alvvays and Courtney Barnett.

In case you missed it, you can also read our 5 Songs interview with Death Cab For Cutie’s Ben Gibbard, where he offers a hearty endorsement of The Beths.

At the Harley-Davidson Roadhouse: T-Pain, 9:45 p.m

Every now and then T-Pain gets a chance to prove to the world that he can really, really sing. First it was with that incredible Tiny Desk Concert performance a few years ago, and then this year it was with his disguised appearance on “The Masked Singer,” the ridiculous reality hit that he handily won. Don’t let the Auto-Tune fool you: He’s got a killer voice, and just as importantly he can write a killer jam. Pop culture is endlessly more fun with him in it.

Here’s one of the most surprising bookings of this year’s entire Summerfest lineup: Andy Samberg’s joke pop-rap trio The Lonely Island, featured on so many of the most memorable “Saturday Night Live” video shorts and in the cult 2016 mockumentary “Pop Star: Never Stop Never Stopping” (it’s much funnier than it looked if you’ve never seen it). Can the joke survive an entire concert? We don’t know, but there’s a real curiosity factor with this one.

For the last few years, GGOOLLDD have been one of the most popular live draws in the Milwaukee music scene, and with good reason: No other act conjures quite the same sense of glamour on stage. It’s easy to see why the synth-pop group is one of the few local bands to earn an actual headlining spot at the festival; they’ve got showmanship for days.

And Backline alum Abby Jeanne has been enjoying a huge year as well. Earlier this year she released her electric new album “Music Box Dancer,” which was widely acclaimed. If you missed it, you can revisit our You Should Know feature on the singer/rocker.

How to get in free today: College Pride Day

For College Pride Day anyone can show up between noon and 3 p.m. wearing a hat or shirt from one of the participating colleges and receive free entry. This year’s participating colleges and universities include Alverno College, Cardinal Stritch University, Carroll University, Marquette University, Medical College of Wisconsin, Milwaukee Area Technical College, Milwaukee School of Engineering, University of Wisconsin-Milwaukee and several others. Also new this year, high school students who present a verified high school ID during this promotion will also receive one free admission ticket.