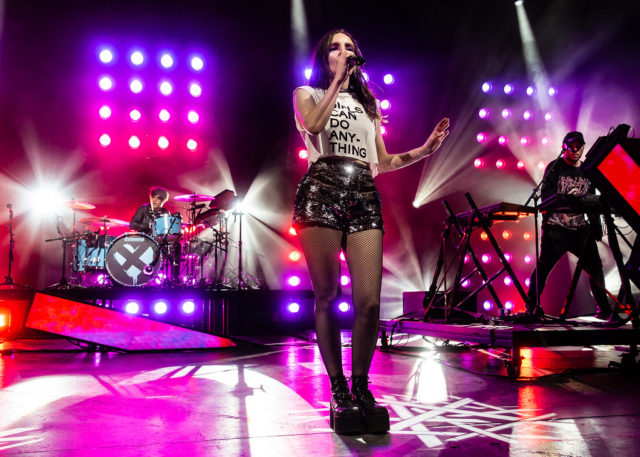 Every day during Summerfest, we’re rounding up the festival’s highlights and hidden gems and sharing Radio Milwaukee staff picks. Here’s everything you need to know about Summerfest’s Tuesday, July 2, lineup (featuring Liz Phair, CHVRCHES, Chaka Khan, A Boogie Wit Da Hoodie, Young the Giant, MT Twins and more) as well as the full schedule and how to get in free today.

(If you’re looking for the Wednesday, July 3, lineup, you can find it here. You can also find Summerfest’s complete daily schedule here.)

I’ve seen Liz Phair at various points throughout her career, and I can remember at least one show that was disappointing — she’s been known for her struggles with stage fright. Last October when I saw her at Turner Hall Ballroom, though, she was in great voice and seemed to be having a blast. It was fun to hear my favorites from college live. So I’ll be back for more tonight.

Every year a legend comes to Summerfest and I’m amazed by the lack of fanfare. This year it’s Chaka Khan. On the heels of a new release that brings some of the freshest funk to come out in years, I wouldn’t miss this show for anything.

Dance in the dreamscape of Scottish indie-pop darlings, CHVRCHES. Their most recent record, “Love is Dead,” offers energizing melodies and consistent, delicious drops. Their live shows combine lead Lauren Marberry’s enchanting vocals and charming personality with the energy and spectacle of a rave.  They have been hitting major festivals this past year, and their set tonight is sure to be one of the most fun and current performances at Summerfest.

A Boogie Wit Da Hoodie is one of Summerfest’s big rap booking this year, a New York rapper with a hugely devoted fanbase and some newfound commercial success under his belt (his most recent album “Hoodie SZN” debuted at number one on the charts this winter). So that’s nice; it’s always good seeing Summerfest book rap acts outside its usual pool of The Roots/Talib Kweli/Atmosphere/etc.

But as is usually the case with so many of Summerfest’s rap bookings, the best thing about this bill is the local openers the promoters have stacked it with. Ahead of A Boogie’s 10 p.m. set, the audience will be treated to one of the city’s most undeniable rap acts: MT Twins, a group working with a higher ceiling than quite possibly any other in the local rap scene right now.

Don’t mistake the duo’s sugary hooks and slick pop instincts for superficiality: Brothers Dexxx and Donno Sanders are two of the city’s most soulful, devastatingly candid songwriters, seemingly incapable of writing a verse that doesn’t cut like a box opener. They pack every song with tales of ambition, trauma, relationship woes and conflicted loyalties. It isn’t always pretty, but it’s always from the heart. This is music that bleeds.

The GWML showcase highlights just a few of the talented youth that have performed at the monthly event throughout the school year. The lineup includes MCs J-Hud and El Bangerz, bands K-Stamp, The Golden Grenades and The Fresh Coast Kooks, a solo performance by drummer K.J. and DJ Enzo on the 1’s and 2’s. It’s been great to see them perform at 88Nine, so I can’t wait to what they have in store for an even bigger stage like Summerfest.

A lineup made in soul and soft-rock heaven, featuring two of the smoothest voices of the ’80s. Amazingly, this concert will be Richie’s first time ever playing Summerfest as a solo artist, and his first time performing at the festival since 1982, when he performed as a member of The Commodores.

It’s Sentry Foods Children’s Fest Day. For this promotion, all you have to do is show up (between noon and 3 p.m.), and you will be admitted for free. Select food vendors will also offer discounts on food and beverage items today.

Please note that First Aid Kit is no longer playing Summerfest tonight; they canceled their tour due to “unforeseen medical circumstances.” First Aid Kit have been replaced on the bill by Liz Phair.