Remember when Elton John was the surprise guest at Harley’s 100th anniversary?

Remember when Elton John was the surprise guest at Harley’s 100th anniversary? 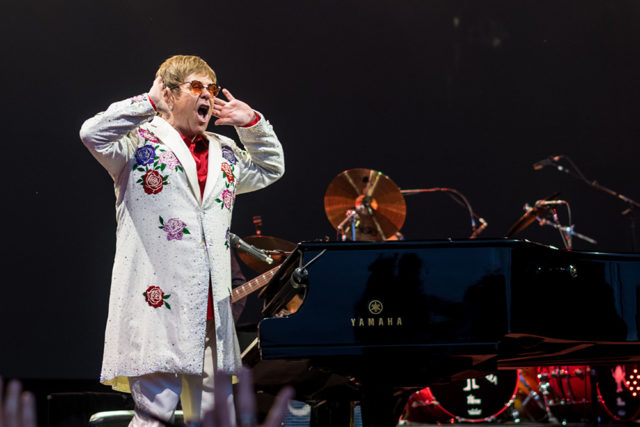 The centennial anniversary celebration for Harley-Davidson was a big deal in Milwaukee. These days, we’re used to Harley hosting these parties about every five years. But in 2003, Milwaukee practically shut down for this massive event for the first time to welcome about 20,000 riders. Hotel rooms were booked solid and Milwaukeeans were getting paid to leave town and rent out their homes to visitors. All of this was for a week long celebration, a three day festival at the Summerfest grounds and a free concert in Veterans Park on the last day with a surprise guest.

With acts like Billy Idol, Joan Jett, Poison and REO Speedwagon booked earlier in the week, the bar was set high for the surprise concert. Harley rider’s took this and ran with it—hoping that the Rolling Stones or Bruce Springsteen would be performing (even though the Stones were in Europe around that time and the Boss was scheduled to play Miller Park the following month).

When it came time for the finale concert, openers The Doobie Brothers and Tim McGraw took the stage to a tepid response, though after all, they were only the openers. The crowd remained patient. Then, Kid Rock came out to the excitement of many. Little did they know, it would be the highlight of the night.

Then, when it was time for the headliner, Elton John appeared on stage only to be met by thousands of people booing and walking out. And though John came out with the hits like “Bennie and the Jets,” “Rocket Man” and “I Guess That’s Why They Call It The Blues,” he struggled to win the crowd back over.

One of Piet’s fellow writers at the Journal Sentinel, Jim Stingl, said Elton John at the Harley 100th was as ludicrous as seeing Metallica at German Fest or Carole King at Metalfest.

And in 2007, when Harley-Davidson announced plans to host a 105th-anniversary bash in Milwaukee, they promised John would not be back, to which everyone cheered. Instead, they gave Harley fans what they wanted in 2003, Bruce Springsteen.

John has been back to Milwaukee since—his actual fans showed up to a well-received 2005 Bradley Center appearance. Now, his next concert in Milwaukee is close to selling out, proving thousands of people in Milwaukee do care about him, just not the Harley biker crowd.

When people know they’re getting Elton John, they love Elton John. Hopefully they also won’t mind waiting a few extra months to see him in October.

If Milwaukee made it through Elton John's Harley-Davidson concert, we can deal with a postponed farewell tour

Sir Elton John was supposed to be coming to Milwaukee this week on February 19 for the last time on his Farewell Yellow Brick Road tour, but it’s been rescheduled to October 19. That’s disappointing, but it probably won’t rock Milwaukee more than when he was in town in 2003. Remember when he was the secret guest at Harley’s 100th anniversary party in Milwaukee? We do.

Read more and listen to the podcast episode below to relive that 2003 concert with us.