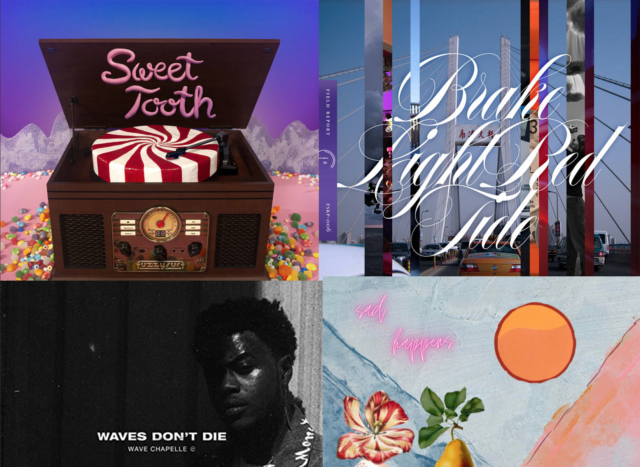 This was my favorite Milwaukee album of the year. I got to interview the group for Milwaukee Music’s 20 of 2020, and I’ve got to say, their creativity compares to bands like The Flaming Lips and The Beatles. From top to bottom, this album is stacked with perfect pop songs.

This was Piet’s personal favorite Milwaukee album of the year. Of Field Report songwriter Chris Porterfield, Piet says “He’s always been a very poetic songwriter, coming up with lines and phrases are feel intimate and personal but mysterious as well.” Piet says the addition of Caley Conway to the group and jazzier textures of these arrangements lend something special to this short but wonderful record.

Reggie Bonds only released this record on vinyl and cassette, charging $111.11 for it. Yes, that’s a lot of money, but it’s a lasting album — a record that will hold up for many years to come. Bonds captured the aesthetic of classic Public Enemy records, with the updated sensibility of Run The Jewels. And Bonds is a very agile rapper and very plugged into what’s going on in the world. He has a lot to say.

Wave Chapelle has found a way to take the sonic trappings of top 40 rap and throw some surprises on it. He’s a strong rapper who always brings something unexpected to the table.

Of the former Milwaukee residents’ new album, Piet writes, “It’s a stunner of a debut, with Tae’s towering voice — reminiscent of the grit and grandeur of P!nk — matched by moving, strings-and-keys-seasoned R&B that make the heartbreakers burst and the anthems soar.”

This album is absolutely gorgeous. Not only does it capture a somber, melancholy sound that I think speaks to 2020, but it has a warm, analog aesthetic that truly hit the spot.

That’s right, this band has two albums on the list. One was the tropical pop duo’s summery album “Bad Love,” and the other is their new children’s record “Sad Happens,” which is the rare kids album adults can enjoy, too. This band is just so much fun, and they sound like nobody else in the city.

Here’s another one that was just fun. “‘Positively Space Raft’ is a pop-rock blast, with sweet singalong vocals and an abundance of guitar-and-keyboards-riding earworms,” Piet writes of Space Raft’s latest. And best of all, the band even released a Nintendo game to accompany it. Talk about going above and beyond.

Hear us talk about all these albums below on this week’s episode, and find Piet’s complete list at JSonline. And, of course, every day through Dec. 20 Radio Milwaukee is spotlighting one of our favorite Milwaukee albums online and on the air as part of Milwaukee Music’s 20 of 2020. You can catch up on our picks so far here.