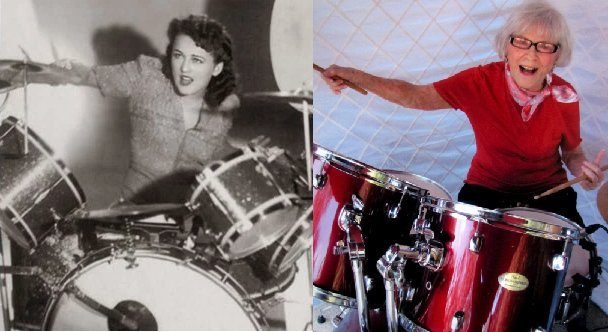 We don’t know who the winners will be at this year’s 40th Annual Milwaukee Area Music Industry Awards, which take place Sunday, April 19, at Turner Hall Ballroom, but we do know who the WAMI Hall of Fame inductees will be.

In addition to the veteran soul act The Esquires, which formed in 1957, the influential roots-rock band Semi-Twang will be inducted — they’ve been at it since the ’80s, reforming in 2009 after a long break — as will Kevn Kinney, of another influential roots act, Drivin N Crying.

But there’s one act getting inducted who you may not have heard of, and her story is impressive: At 107, drummer Viola Smith may be the world’s oldest, still-active professional musician.

Smith grew up in Mount Calvary and was one of the country’s first professional female drummers. “In the 1920s and 1930s, Smith played in the Schmitz Sisters Family Orchestra founded by her father,” according to the WAMIs.

She was dubbed the “world’s fastest girl drummer,” and not only played “The Ed Sullivan Show” five times, but also performed at President Harry Truman’s inauguration in 1949.

You can stream this week’s episode of Tap’d In and find a video of Smith in action below.