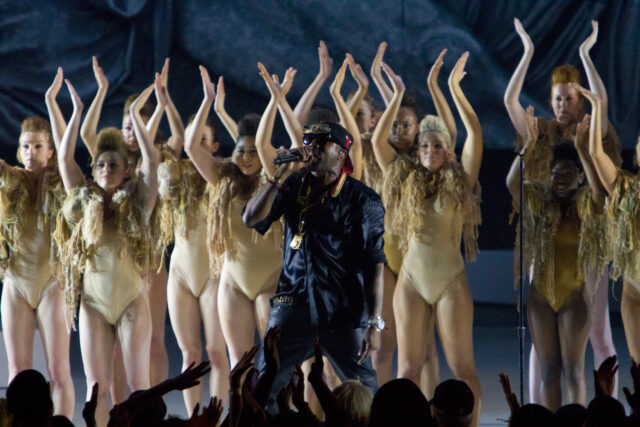 Normally this time of the year we’d be in the thick of Summerfest. Absence makes the heart grow fonder, so we thought we’d go back and revisit some of our favorite shows we’ve ever seen at Summerfest. Amazingly, a lot of them are available to watch on YouTube.

Among them: Wiz Khalifa’s 2011 concert at the Harley-Davidson Roadhouse stage. There were rumors that day that Wiz Khalifa might not show up, but that didn’t stop a huge crowd from turning out. “I don’t think I’ve ever experienced a crowd like that before, where it was just shoulder to shoulder crowds all the way back to the lake,” Piet recalls.

We also recall Kanye West’s 2011 show at the Marcus Amphitheater. He was just coming off of “My Beautiful Dark Twisted Fantasy,” an album that was immediately hailed as a masterpiece. Amazingly, he didn’t tour behind that album. He only did three shows in the United States that summer. One of them was at Coachella, and he basically brought that set to Summerfest. “I don’t even know how they pulled that off, how they go him,” Piet marvels. “We were extremely lucky to see him at the peak of his power.”

I also share memories of opening up for Pitbull in 2010 at the Harley-Davidson Roadhouse. This was when some of his hits were on pop radio, and for me to see a Latin artist filling a grounds stage gave me so much hope. It also predicted the emergence of Latin music as a huge commercial force in America.

And, of course, we also talk about one of the biggest gets in the entire history of the festival: The Rolling Stones in 2015. It was by far the smallest show on the band’s tour that summer, and the University of Wisconsin choir came out for “You Can’t Always Get What You Want.” Hear us talk about all those shows and more, including a 2000 No Doubt concert with openers Black Eyed Peas that left a huge impression on me.