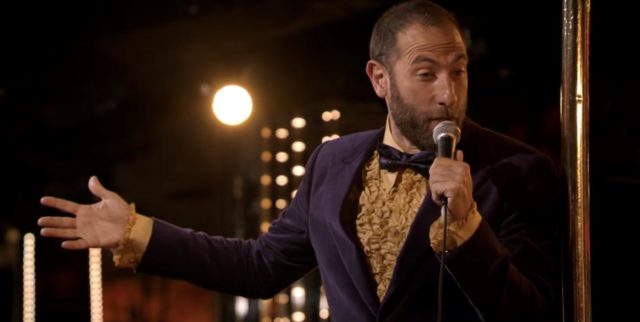 Now in its fourteenth year, Milwaukee Comedy Festival is Milwaukee’s biggest and best. This year the festival has more than a dozen different shows and events at multiple venues including (but not limited to) Lakefront Brewery, The Underground Collaborative, Shank Hall, Turner Hall Ballroom and more. This weekend is your best chance to catch national and regional comedy acts including stand up, improvisation and sketch comedy live on stage in one big event. In fact, if you’re finding out about it through this post, you’ve already missed the better part of a week’s worth of events.

Fret not, however, as the weekend has the best of the rest. Todd Berry headlines at Shank Hall tonight with an afterparty at Vanguard. Tomorrow, Judah Friedlander of “30 Rock” fame is running two shows at Shank Hall and there’s a late-night option at the Underground Collaborative. Saturday features more acts throughout the day at the Underground Collaborative with Beth Stelling on the big stage at Shank Hall. Sunday sees no let up as more comics throughout the day at The UC and very funny man Ari Shaffir headlining at Turner hall. Dang, that’s a lot of comedy!

Ever been to Summefest and seen that parkland peninsula across the lagoon and thought that would be pretty cool place to visit? So did Newaukee as they have settled in for an annual beach party styled event held every August under a late summer sunset. Whether you kayak, bike or drive down, there’s plenty to do at this super chill mini festival. They’ll have Hawaiian dancers teaching steps, henna tattoos, hula hooping, face painting, a rock wall to climb and the ubiquitous beer tent. Of course there’s also music; this year featuring Unity The Band, Ocean Rush, Kojo and DJ Ronco wrapping the event with a dance party. Trust me, this event is a sneaky-good time.

If you don’t know our State Fair I’m not sure I know what to tell ya. I’ll tell you though, no matter what your feelings are about it, Friday night is the night to go. That’s because indie pop sensations Fitz and the Tantrums will have the Main Stage crowd dancing on Friday night. The band formed in 2008 and quickly found themselves on tour with arena acts and building a reputation as a must-see band at music festivals around the country. In 2013, Fitz and the Tantrums released their breakthrough major label debut More Than Just A Dream, which featured No. 1 Alternative Radio singles “The Walker” and “Out Of My League.” Their current album Fitz and the Tantrums­ includes their biggest hit to date, “HandClap.” Don’t sleep on K. Flay either, they open for F&TT and are pretty dope too.

Saturday at 7 p.m. @ The Riverside Theater

It’s safe to say that some 25 years ago Staten Island rap crew the Wu-Tang Clan changed hip-hop forever. With the release of their seminal statement album “Enter the Wu-Tang (36 Chambers),” the group changed the rap game with the dopest beats over even more wicked flows, introducing a cast of now legendary personalities. The Wu Tang Clan has released seven gold and platinum studio albums with worldwide sales of more than 40 million albums. With the release of their debut album in 1993 songs like “C.R.E.A.M and “Protect Ya Neck” introduced hip-hop pioneer, The RZA, as a groundbreaking hip hop craftsman that he is. With lyrics that combine the reality of 1990s New York and the world of martial arts, the Wu-Tang Clan has created a unique mythology that captures the hearts of fans worldwide. They don’t come to Milwaukee often, so you might want to check ’em out.

Man, how have I never been to this festival? That’s what I thought to myself when I discovered it this year and learned that it’s in it’s seventh year! No time like the present to find out what’s up with Milwaukee’s Puerto Rican community and the only Latino festival in the state that recognizes Puerto Rican culture and community. In some ways the event is a kind of family picnic, so bring a big blanket or some folding chairs. I couldn’t locate a lineup, but they will have live music and, of course, Puerto Rican food.