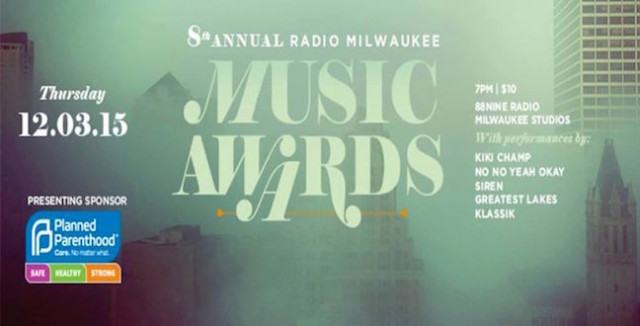 Ever ask yourself…”I wonder what’s going on this weekend?” I thought so, read on…

Color me brown and orange, but I’m really a huge fan of the parties we throw here at the station and the Milwaukee Music Awards tonight in our home looks to continue a tradition of good times, great music and some of the most interesting people to be in the mix with. All the DJ’s (except Dori Zori, who’s under the weather) will be there plus music from Klassik, Greatest Lakes, Siren, No No Yeah Okay and DJ Kiki Champ. But the fun really starts when the awards come out and it’ll be interesting to see who gets album honors, song of the year, best video and all the rest; we’ll finally see who’s the the best for 2015!

You might not want to miss the Brothers By Choice show in Riverwest on Saturday, it’s the only show these venerable Milwaukee soul pioneers will perform n 2015. If you caught their appearance at Burnheart’s PBRfest a couple of years back, you know the show will be smothered in soul and the Brothers drenched in sweat. BBC’s history is a fascinating one, kind of like a local version of Charles Bradley’s or Sonny Knight’s in that their considerable talent was criminally ignored only to rise again due to the diligence of record diggers and music afficionados. BBC is original soul music from some cats who were there when it wasn’t vintage or retro.

It’s a great weekend for seeing local music, so many good bands but that means you’ll have some tough choices. Saturday night has another intriguing event and it’s a triple shot of bands who all know how to bring it. De La Buena headlines and keep the cooking quite tropical; smothered in afro latin rhythm and covering rare tropical classics, De La will cap the night in dance. Don’t miss Foreign Goods or the super dynamic sounds of New Boyz Club either, both are bands on the rise with deep local support. I fully expect this to be one of the best shows of the wekend.

Saturday’ll stay ridiculously loaded with options until you decide what your doing and you may want to head to Anodyne in Walker’s Point for some serious songwriting from three acts who’ve got quite a bit of craft in their sound; the minimalist Americana of the highly underrated group Buffalo Gospel, the dark and ghostly folk of Hello Death and Christopher Porterfield of Field Report rounding out a show that looks truly captivating. The kind of show you don’t talk at when the music’s playing and yet another in a solid run of shows at Anodyne.

Who in 1997 could’ve predicted that the Festivus gag from Seinfeld would become an actual thing? On Saturday, you can head over to Brady Street to find out what Festivus looks like. Teams will have a chance to air their grievances and participate in feats of strength all in an effort to win the highly coveted Festivus pole. Competitions begin at 9:30, 11, and 12:30. Follow one Team or hop around to your favorite Brady Street bars all night long! Looks like a sloppy good time!