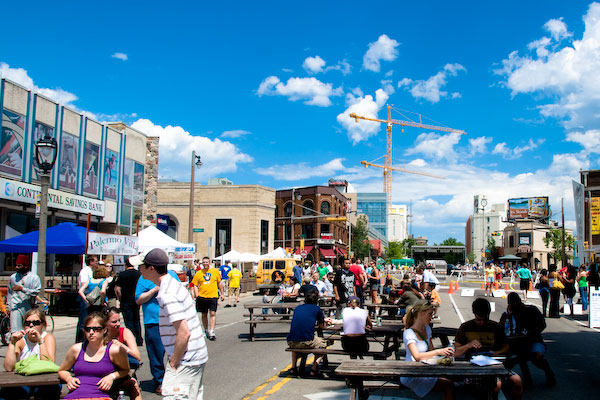 For me, Karl Denson is the kind of musician who I discovered after discovering I’d already discovered long ago. I had been an indirect fan through his work in Lenny Kravitzs’ band, with The Stones as well, leading the Greyboy All-Stars, plus collabs with The Blind Boys of Alabama, Blackalicious and Switchfoot but really didn’t know that this longtime saxophonist and session cat had a project bearing his given name. My a-ha moment came years ago, and I’m stoked he’s in town this Friday for what will definitely be an extra funky jam session. The kind of session that brings a crazy diverse cross-section of music lovers and the kind of performance that brings superlatives.

Maybe it’s just me, but I feel like MAM After Dark is a pool I like to dip into at least once a year; it makes me feel cool. This Friday’s version, which comes in tandem with the Lakefront Festival of Art, looks like a good one to be at. I mean you could make a day out of it and see the music, shop artist booths, nosh at food trucks and chill in the wine garden during the day. And you might as well stick around because a ticket also gets you into the After Dark part. You might need a wardrobe change, but this might be worth it.

For real though, I have no idea how, I mean how I didn’t know Milwaukee has a taco fest. Let alone one heading into its sixth year(!). Oh dios mio, that’s a flaw in my program, a critical failure of discernment that I can only forgive in myself by going to this one. The Taco is a perfect food, one of those foods that I consider timeless and awesome in so many forms that I could probably eat one every day for the rest of my life. A food I sometimes wake up craving. A food I find myself missing the most when I travel to countries that don’t have them (like why would you still live and be unaware of their awesomeness)? Taco Fest is happening this Saturday on the Summerfest Grounds and I bet they beat last year’s record of nearly 10,000 tacos consumed. Plus they’ll have live music, Mondo Lucha wrestlers, margaritas and even Chihuahuas, which I presume are not for consumption.

Summer Soulstice Music Festival can brag all they want. Being Milwaukee’s largest local music and arts event every year has its merit with me. Plus I can say for certain that I’ll be there with the other 88Niners as we’re the media sponsor and will be handling introductions for the music there all day. With FOUR stages, 21 acts, BMX demos, a rock climbing wall and family activities. Weather permitting, this is a great festival to be at; stage to stage to food truck to beverage tent to artisan stall to shop, drink, eat and be merry in the sun. I love how local it is, yet big enough to be the only thing you might get into on the day. Also, the music lineup is stacked and highlighted by performances from B~Free, Lex Allen, Chicken Wire Empire, Luxi, Surgeons in Heat, Telethon and Zach Pietrini.

Bet you didn’t even know that Milwaukee not only has a Cuban festival let alone one that’s been swinging for about 14 years. That’s probably because until now it’s had such a small footprint, being a simple block party in front of Cubanitas in the heart of Downtown. With their second location opening recently in Drexel Town Square, they now have a much bigger plot to play with and my gut says this festival will continue to get bigger and better. Once again, the music is on point, with Latin music from some of the city’s best players; Salsa Power, Clave y Afinque and hard salsa veterans Nabori all taking the stage to keep the dance floor hot. The food should be on point as well.

REPORT: the calm before the Summerfest storm isn't actually that calm, but it looks like fun