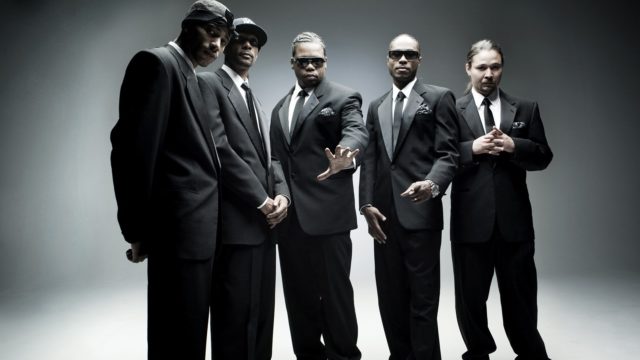 Plausible scenario… You listen to 88Nine on Friday, happen to tune in at around 1pm and catch a phenomenal band playing live on our airwaves. Eventually, you discover you’ve been enjoying the live set from Tennis who are in for a session on Friday. You also discover that they’ve a show on Friday night at Turner Hall so you make some calls, get a homie or even better, a date to go to the show with you and bam! you’ve got weekend plans. It can be that easy. And why not, Tennis has an exceptional new album called Yours Conditionally that the husband-and-wife team of Patrick Riley and Alaina Moore self-produced and composed both on land and at sea during a five-month sailing trip through the Sea of Cortez. How romantic… (Show up early and you can also catch electronic duo Overcoats opening up for Tennis).

The fight against January starts this weekend. You in?

Let’s face it, you probably did not recently discover Bone Thugs, you are probably old now and this isn’t a bad thing. You know what you like and if you were getting down to ’em back in the day, you still will and this is your weekend to see if they (or you) still got it. Of course you do, so you might ought to check the Bone Thugs show tomorrow at The Rave. Even though it’s not the first of the month, they gotta be playing their jams right? Even I have to admit I’d go see Bone Thugs, super guilty (okay, not guilty) pleasure; plus they got my friend Jank One on the decks to get the spot hot before they hit the stage.

This week’s 414 Live guest Ian Olvera, is unveiling a new project this weekend at the cactus Club this Saturday. Last December, scene veteran Ian Olvera announced the new project, Daydream Retrievers and has quickly put together a new CD for the new year and this weekend’s show is that debut. Last seen working with The Sleepwalkers, Olvera’s latest project sounds pretty good to me and you can get to hear the fruits of it at a show with a sneaky good lineup that has Quinn Scharber, Marielle Allschwang and Graham Hunt on it.

I was a huge Led Zeppelin fan when I was in high school, no lie; when I was a sophomore I would always grab my walkman and walk to school and for a whole year I only listened to Led Zeppelin’s Physical Grafitti. Side A on the way there and Side B on the way back, never got tired of it. In not totally unrelated news, No Quarter, Milwaukee’s Led Zeppelin tribute band is throwing down at the Weill Center in Sheboygan this Saturday…

Another old-school band back in the area again this weekend is Big Head Todd & The Monsters at the Pabst Theater this Sunday night. BHT&TM have been busy since their mid-80’s inception and 11 albums in, seem determined to stay at it. 2017’s New World Arisin’ sees the Monsters back with material that shows that old can be new again if you stay at it long enough. The album has a straight-up, pop rock feel with stops along the way for country-rock, expansive storytelling and even a dash of metal. Also on the marquee, Ronnie Baker Brooks so get there early.