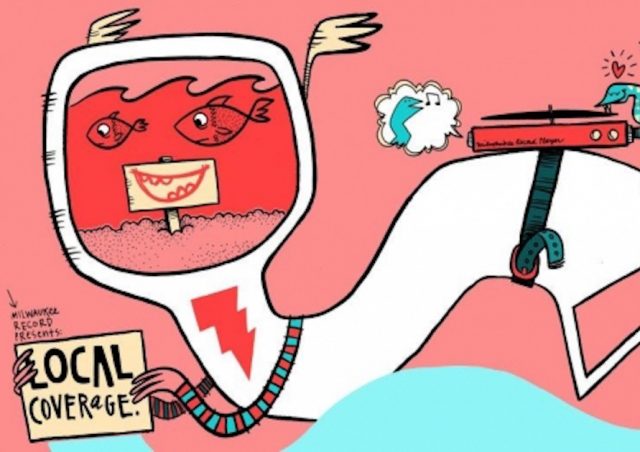 What’s really kind of amazing, now that I think of it, is how long G. Love has kept his sauce so special. I remember seeing cat way back in the 90’s when I was at college; utterly convinced that his blend of hip hop and the blues was gonna be the next big thing. And it sorta was, well, for G. Love it was and it would become the blueprint for his seemingly never ending career. Amazing really, especially when you consider the Philadephians were never really major stars, just stayed true to what they do. So if you’re looking to start your weekend a day early, you might wanna check out their show at Potowatomi tonight.

The Holiday lull is only a lull if you don't do anything, get out and check something out...

One of the first rites of passage as we press forward into the wilds of 2017 is the annual Local Coverage show that Milwaukee Record hosts at Turner Hall this Friday. Local Coverage is wound around an interesting idea that features several local bands covering each others’ material in short, revue-like sets. I like it, it sets up the scene to comingle in new ways, introducing various fanbases to each other and making something more whole as a result. Plus, all profits go to benefit Girls Rock Milwaukee and COA Youth & Family Centers.

So who’s paired with who, you ask?

When The Replacements ended their 33-show reunion tour in June 2015, founding bassist Tommy Stinson walked away with his head held high. Armed with a pocketful of new songs and a clean slate, he holed up at his home studio in Hudson, NY and played solo tour dates with a group of players/friends backing him and over the next year and a half they pieced together a brand new record, resurrecting ‘Bash & Pop’, the band Stinson started immediately following The Replacements first split in 1991. If you’re as curious as I am, you can check them out this Friday at the Cactus Club with The So So Glos and a hyped up Ken Sumka!

This Friday has options… As it turns out two of Milwaukee’s better bands, Vinyl Theater and The Living Statues, are teaming up for a show at The Rave. Both bands get lots of love from us here at 88Nine and for fans of Vinyl Theater should note that the show is going to be the first time you can hear them play music from their new album.

Friday at 7pm @ The Rave

Friday night is also looking like a good night to get out your gabardines and kick it South to Kochanski’s Concertina Bar as The Delta Bombers are making Milwaukee a stop on their never ending tour schedule. Started by four teenagers in Las Vegas, The Delta Bombers are a band that revels in an unruly hybrid of 50’s rock and roll fused with blues and rockabilly. Legend has it that their live shows are quite good. Although I’ve not seen ’em, this weekend looks like a good one to try something new. Also on the bill, Milwaukee’s own high energy rockers The Grovelers. My gut says this one’s gonna be quietly awesome (in a loud way)