There’s no rule that says I must write about all our in-house festivities but it is what I’m doing. Last year, the Fall Ball was a blast and I didn’t even write about it so I thought I might this time around. Besides being a killer party, it’s also a sort of ‘Doors Open’ event where people’ll be able to kick it in our offices and other spaces in the building.

Our Fall Ball is also a fundraiser for the station, so there’s that, but really it’s our version of a house party. There’ll be a sort of mixer with food and drink to start the night that weather permitting, will be on our beautiful green roof. After cocktails, we have some live karaoke on the first floor featuring some brave volunteers singing some jams backed by a live band also to raise money for the station. The night ends with a DJ battle that as it stands right now is Me and Kenny Perez versus Jordan Lee and Dori Zori and we’ll be going cut for cut and keep the crowd hype. Guaranteed good times…

…which also means props to Amelinda Burich, who has been holding down the weekly blogspot so I could get my vacation on. Ecuador was nice, thanks for asking; but now that I’m back, I must admit I am as thirsty for something to do in my native town as I’ve ever been…

88Nine has teamed with Summerfest since I was gone, and has put together an intriguing night of music that we already love here. Tonight, the band Big Thief and singer-songwriter Haley Bonar hit the stage at JoJo’s on the Summerfest Grounds for a free show. Haley Bonar’s “Kismet Kill,” a song we’ve only just discovered, shows Haley’s knack for introspective songwriting that expresses a lot by way of simple turns of phrase over lushly emotive instrumentation. Though new for us, Bonar’s been at it for a decade and a half and clearly can hold her own.

She’ll open for the NYC four-piece Big Thief, whose debut Masterpiece showcases a band equally at home in wide open emotional spaces and intelligent storytelling without ever forgetting to rock. Though it looks like a rainy day, the forecast as of now looks like it’ll clear in time for this show to hit without a hitch and besides, it’s free!

Tonight at 7pm @ JoJo’s on the Summerfest Grounds Our very own Architect, Tarik Moody is offering a jazz tribute to hip-hop classics on John Coltrane’s birthday this Friday in Riverwest. Held at Company Brewing, the event features not only Tarik on the tables but a bevy of Milwaukee jazz musicians taking on hip-hop classics from artists like TuPac, Outkast, Common, NAS, and The Roots connecting hip hop classics to earlier, jazzier roots.

Honestly, this looks like a great event to take a date to as there will also be special, supper club style dining to complement the music. Part of the proceeds from the event will benefit True Skool,whose mission is to use the urban arts as a tool to engage youth in social justice and humanities education, community service and civic engagement.

The Milwaukee Film Festival kicks off its inaugural weekend this week and if you happen to be seeing screenings at the Oriental Theater this Saturday evening you might want to go around the corner to The Hotel Foster for some post-film partying. Though I’m not one hundo that this is connected to the festival, I suspect it is and it looks like a fitting spot for a good time nonetheless. The lineup strikes a nice balance with local rockers Whips and hip hop from the Rusty P’s while DJ’s Why B and Asher Diamonds take turns keeping the crowd lively in-between and after the live sets. If memory serves correct, these post film fest parties tend to be well-heeled, well-attended good times worth checking out.

Saturday at 8pm @ The Hotel Foster 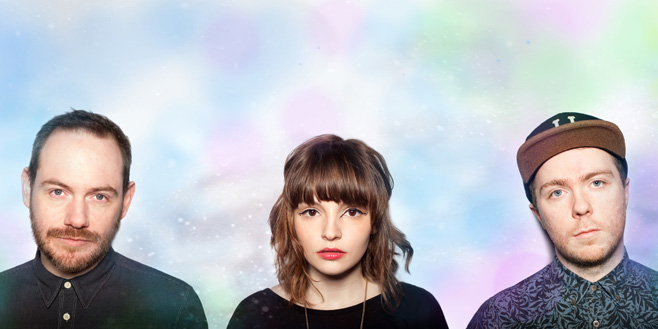 The weekend closes on a high note when Glasswegian synth-pop band CHVRCHES headline a show at the Riverside Theater in support of their new album Every Eye Open. Hard to believe it’s already been three years since their 2013 debut The Bones of What You Believe and their anthemic, breakout hit “The Mother We Share” lives on on our playlist. And though the new album lacks the kind of runaway hit of the debut, their synth-pop melodies should still have the crowd moving. CHVRCHES also have the perfect MKE complement in sound with local pop duo Reyna opening, so get there early and be ready to sweat out a dance friendly set to close the weekend right.

Sunday at 7pm @ The Riverside Theater