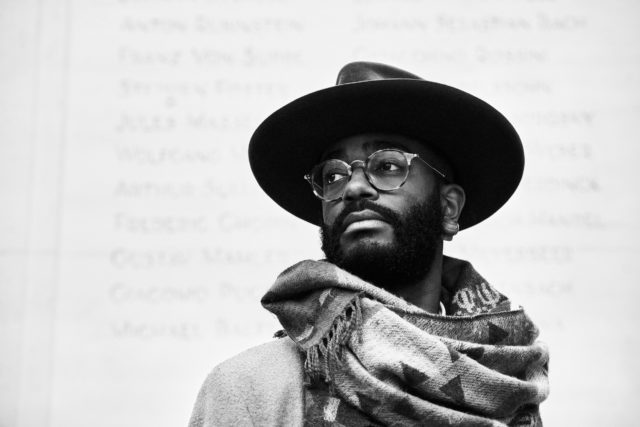 It can be hard to figure out what to do by the time the weekend arrives, why not make a plan? Oh snap, why not do something earlier in the week while you’re at it? Fortunately, I have some things ready for you to ponder…

Milwaukee musician Kellen “Klassik” Abston is what I’d call a top-tier musician here in Milwaukee. The kind of artist you wanna check out when he drops new material, the kind of artist to build a live show around and the kind of artist you put on the radio. Check, check and check on all three fronts this week as he puts together the most compelling music event of the early week at Club G’s in Bay View. Working from a new batch of clever originals from his new album “Quiet,” he’ll be putting on a short show for those in attendance and the set will be broadcast by 91.7 WMSE live as well. I’d see it live if you can…

Imagine an intimate show in Bay View featuring excellent Brazilian music from a band be-decked in all white. Playing the kind of music that’s chill enough to lose yourself to its tender mercies. Such is the vibe for Brazil-born artist Sessa. A long-time fixture of both the American and Brazilian music scenes. His songs are sung in Portuguese, with visceral, sexual lyrics in the vain of Caetano Veloso and melodic flourishes not unlike those of Tom Jobim. However, the music gets a deliberate minimalist treatment rarely found in contemporary Brazilian music, more reminiscent of the bareness of Leonard Cohen. And add to that already heady invitation into an alternate realm, the talent of Milwaukee’s Marielle Allschwang & The Visitations, and you have a show to carry you straight through the weekend.

An acclaimed songwriter and electrifying performer, Grace Potter has been described by Spin as “one of the greatest living voices in rock today.” Over the course of her career, the Burlington, VT native has commanded stages around the world including Coachella, Lollapalooza, Bonnaroo, Rock in Rio and her own thriving music festival, Burlington’s Grand Point North, which just celebrated its ninth year. “Daylight,” her first new album in four years, is a soul-inflected, deeply personal collection of songs that capture a particularly tumultuous period in her life – from the breakup of her band and a divorce – to more joyful events like a new marriage and the birth of her first child. Do NOT miss Devon Gilfillian‘s opening set either, he’s stackin’ accolades for his amazing music…

A lot of people know Ray Parker Jr. from his contributions to the movie “Ghostbusters,” for which he wrote the title cut. But this cat has crafted a career I’d almost put on par with the great Quincy Jones. His accolades include his own amazing work with his band Raydio as well as penning hits for other artists who are legends in their own rights. If you’re free Thursday and want to be on the right side of a good time, go check him at the Northern Lights Theater.

RadioMilwaukee is celebrating Black History Month with a showcase of black musicians all month. And with Harvey Scales Jr. coming in to the space for this Thursday’s free live session, we’ll be kicking of the month in fine form. Son of the late-great Harvey Scales, Scalez has the funk by birthright and an early session at 88nine is the perfect start to the week’s end.

Nothing beats the cosmic radio narrative of Milwaukee native Abby Jeanne. Her lust for life and adoration from her hometown is what keeps her rising as one of the hottest artists to come out of Milwaukee. After last year’s “Music Box Dancer” release and supporting Brandi Carlile at Summerfest, Abby’s got another full, promising year ahead of her. Kick it off right with her return to Turner Hall Ballroom.

I gotta admit, as hipster as it sounds to make an evening of Vinyasa yoga, music, food and beer complete with the Insta-ready locale of Miller’s historic caves —it actually sounds pretty cool. That’s what’s happening this Friday and I’m pretty surprised it’s not sold out already. As trendy as mindfulness is these days, I wouldn’t mind being there…

There ain’t a ton of reggae shows around town these days but Madison’s Natty Nation is rolling into the city for their annual Bob Marley Birthday Bash. Natty Nation has been a regional staple for years and years, if you love reggae, go see them.

From the days of playing greasy local juke joints to headlining major festivals, JJ Grey remains an unfettered, blissful performer, singing with a blue-collared spirit over the bone-deep grooves of his compositions. His presence before an audience is something startling and immediate, at times a funk rave-up, other times a sort of mass-absolution for the mortal weaknesses that make him and his audience human. When you see JJ Grey and his band Mofro live—and you truly, absolutely must—the man is fearless.

The Get Down Soul and Funk Dance

Just your friendly neighborhood soul and funky ’45 dance party curated by some dope, super-deep record diggers. This event is a bit of an institution, so if you aren’t familiar with it, you might want to go get yourself an education.

Michael McDermott possesses one of those classic rock voices and uses it without shame. While it may seem a bit ordinary to draw on influences like Bob Dylan to Van Morrison, McDermott does it a touch better than most.

Grammy-nominated outfit, Robert Randolph & the Family Band somehow do a funky foursquare of sounds from funk, gospel, rock and soul. I’ve seen their show; it’s polished and done well, more than a bit of fun. Opening the set is one Carl Nichols, on his solo joint; he’s also one half of Milwaukee outfit Nickel & Rose.

By now we should all be aware of the environmental tragedy happening in Australia. Well, you can do more than just pray for rain; you can head out and have a good time. How does that work? Well Burnhearts and Cactus Club have joined forces to put on an old-fashioned fundraiser with ALL proceeds to benefit Australian animals injured and misplaced from the on-going bushfires in Australia. Five Card Studs are known for their high-energy live shows and DJ Chris Shulist ain’t no slouch either. People talk a mean game about caring and all that but you’re the type to do something amirite?