You Should Know Welshly Arms

You Should Know Welshly Arms 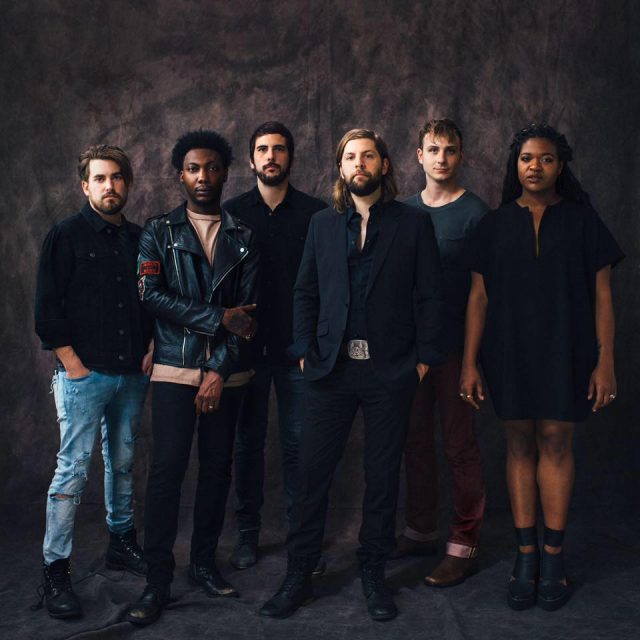 Who: Welshly Arms
Where: The Back Room @ Colectivo Coffee
When: Wednesday, April 19
Tickets and more info: pabsttheater.org/show/welshlyarms2017

Radio Milwaukee chatted with frontman and guitarist Sam Getz last year before their Summerfest performance about Milwaukee, meeting your heroes as a teenager, Summerfest and more.

The band returns to Milwaukee for a headline set at The Back Room @Colectivo on April 19.

Read the interview below and get to know Welshly Arms before they take the stage later this month:

The Cleveland band returns to Milwaukee this month

1. How did Welshly Arms get started?

Most of us played in high school bands together, then went off and backed up other people for a bit. A lot of us were on the road. A couple guys moved away for a little bit, but then we found ourselves hanging out again and I had them over for little barbecues, then little jam sessions. A couple of us were still in other projects. Brett, our keyboard player lived in Chicago at the time but he was starting to come back. He was seeing what opportunities were back in Cleveland for him. He ended up moving, I got off the road and we decided to do a lot more.

We made an EP, went and did SXSW that year and linked up with Position Music who is now our acting label, but also our publisher. They’ve been great partners at getting our music out into the world.

Beer, actually. That’s honestly the first thing that comes to mind. Milwaukee also feels like home. Everybody says Summerfest is a great time. Not many cities have that. We’re from Cleveland, so we have similar weather but we don’t have a cool thing like that to celebrate summer.

This group of people, this style of music, the passion we bring to it and the soul. I’ve never felt so comfortable walking up, grabbing a guitar and playing for people I’ve never met before.

3. Did you grow up with music?

My dad is a drummer. He played in all kinds of bands, mostly country. His cool bands were when he was younger. By the time I was born it was country cover bands because it paid a little bit. We loved all kinds of music.

My mom home schooled myself and my two sisters. So, music was a really big part of the day-to-day, almost like Montessori. Music was the driving force of my education.

One of my sisters is a pianist. She got into church stuff, but my other sister got into classical and was a flutist and was in orchestra. I just loved rock ‘n’ roll, so guitars and drums and stuff like that. We all kind of like different things and appreciated different aspects of music. That’s why my parents were super cool, because that was all in front of us. I thank them all the time. They were also cool enough with music being a career, too. I think it terrified my mom when I didn’t go to college and I went on the road, but she was okay. They are very educated people and all that, so to not go to college wasn’t music to their ears.

4. Are you able to be a musician for a living?

Yeah, but it was a long transition. I started to teach guitar, I had blues bands around the Cleveland area and gigged 2-3 nights a week, ran a blues jam another night. That was when I was 17 or 18. I started my blues band when I was 14 and it was actually with my dad on drums and a couple older guys that got the music I was going for.

There used to be a really great blues scene in Cleveland and they’d bring in national acts. I got to open for people that were my heroes. Peter Green who started Fleetwood Mac, Mick Taylor who was the Rolling Stones lead guitarist for about eight years; I’ve met those guys and opened for them when I was 14. That’s when I realized this is what I was going to do.

I did session work around town, there wasn’t a ton of it in Cleveland unfortunately and there is even less now, but there were a couple of studios. I took every job really seriously, I was always on time, I always brought the right gear. That started to pay off and I had whatever session work there was, but there wasn’t much.

5. What’s next for Welshly Arms? Has touring evolved your music?

Yeah, we weren’t doing tours until this year. That’s probably going to play a lot into how songs get written. I’ll try to write a lot while we’re on the road, so hopefully some experiences we have along the way influence writing the new record. There’s probably going to be a record finished while we’re on tour. We have one in the bag, so that will be the next record. The one after that will hopefully be influenced by Summerfest and the tour.

I can’t tell you how natural it feels to play in this band. I can walk up with this group of people, this style of music, the passion we bring to it and the soul… I’ve never felt so comfortable walking up, grabbing a guitar and playing for people I’ve never met before. I was never comfortable in that before. It’s taking my passion for music to another level. I’m really proud of it and I really love it.