You Should Know Kendra Amalie

You Should Know Kendra Amalie 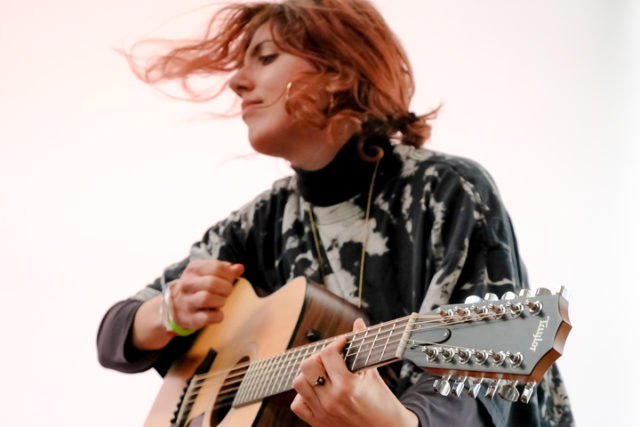 Last week Milwaukee artist Kendra Amalie released her debut album, “Intuition” on Beyond Beyond is Beyond Records. The artist stopped by the Radio Milwaukee studio to talk about the new album, her unique approach to psych-folk through primitive guitar roots on acoustic and electric 12-string, meditation and growing up on tour with a singer-songwriter parent.

When I was growing up, my mother was a performing singer-songwriter full time. She was always working on music at her word processor working on her songs; a mad refining process. Singing, songwriting. The band would come over for rehearsals. I was going to a lot of gigs with her, especially the day time ones in the Washington, D.C. area in the alt-country music scene.

I was taking piano lessons as a young person, but that felt like a chore to me. As a pre-teen I found out about Jimi Hendrix and Woodstock. I picked up a guitar, took some guitar lessons. Something happened in my teen years when I got interested in drum ‘n’ bass and went to raves. After that I started making music on a Game Boy using LSDJ. Experimental electronic stuff. I didn’t start performing until I was in my early and mid-20s when I joined a noise band on harmonium. Twilight Memories of the Three Suns. I was going to local indie-rock shows and saw the band Beat the Devil, one of Shilpa Ray’s former projects and I saw her play harmonium. I thought it was the coolest instrument. My friend Damian [Languell] said, “Play the harmonium in this noise band, but only play one note.” That was a new concept to me at the time. I had quite a bit of anxiety about performing for years, but at some point, it transformed into excitement and regular fun.

2. How did you end up in Milwaukee?

I grew up in the D.C. area until my early 20s. At a certain point I became more interested in jazz and noise and experimental music and was still listening to electronic music; house and drum and bass, and I determined Chicago would be a good place to move to. There’s IDM, house, electronic, jazz, noise and all that stuff. I thought it would have more of a scene, so I moved to Chicago. I lived there for a while then Maine, Oregon, Northern California and all these places but I missed the Midwest. I was offered a really flexible job in Milwaukee.

3. There is a clear aesthetic in the output you’ve done. Your imagery, artwork, music videos… is this project a multimedia vision?

I have a few different ways I express myself. Music is a big one. I also do visual art; painting, on computer with creative coding, that and I’m drawn to the aesthetic of vintage computer art. On the album cover, my aunt took this image. I was doing yoga teacher training with my mom and aunt in Las Vegas. My aunt has a dry lake bed near where she lives outside of Las Vegas. We went out on the full moon in Scorpio on this night and took pictures in the dry lake bed. My aunt was the photographer and my mom shined the flashlight.

The music puts me in a meditative state with repetition of lyrics and themes; it also has a cosmic feel. Is that an intentional vibe you’re putting out?

My writing process and my creative process is very meditative and trance-like. I get in a zone and I’ll work on a part of a song and sit down for 18 hours and trance out on the process. I also am drawn to repetition.

4. You mentioned academic versus freeform improvisation. I like that you incorporate primitive American fingerpicking styles, you don’t often hear those kinds of textures in the realm of music under the “psych“ umbrella…

I’m really drawn to the practice of fingerpicking because it’s very cyclical and trancelike. It feels good, sounds good, I like textures. The textural quality of sound is something of particular interest to me.

I’m not surprised that you’re a painter, there is a sonic palate happening, not just power chords. There are a lot of sonic palates and brush strokes of different modes, pedals…

A lot of that comes from my interest in noise music. With harsh noise, you have to tune your ear to appreciate or at least open your ears to listen to harsh noise for an extended period of time to see what sonic textures and offerings this piece of sound has. Really tune in to listening to music in that way has influenced how my rock album here is layered.

5. How did you discover this early American style of guitar playing, or the 12-string?

For the 12-string, my mom played a 12-string acoustic guitar, six and twelve string and fingerpicking while I was growing up. Maybe in 2013 or ’14 I was living in Chicago where several of my peers in the music community were picking up this American primitive resurgence style of playing. It was in my ear again. At some point I decided to give a John Fahey a try, “Poor Boys Long Way from Home.”

A couple years ago Ryley Walker invited me to contribute a track to Imaginational Anthem volume nine compilation he was putting together. I was going to do textural noise guitar. As of that two years ago, I had never been on a vinyl record before and thought I would never be on a vinyl record, ever. I started taking lessons with Jay Mollerskov here in town, learning classical guitar techniques, reading classical music notation learning etudes. I was playing those and at a certain point I thought, “I’m 35 years old, I’m not going to start learning classical notation on guitar.” There is a guy that teaches American primitive in town, he’s a scholar of John Fahey, Andrew Lardner. I had a lesson with him, we covered some Leo Kottke.

I finally wrote a piece for the compilation, but I had all these other pieces working up to that so I had all this music. Then, I met Dom and Mike from Beyond Beyond is Beyond and they said if I had music I could send it to them. Now, the compilation was just released and this [“Intuition”] is coming out on the 6th.

Stream the new album, “Intuition” out now on Beyond Beyond is Beyond records: