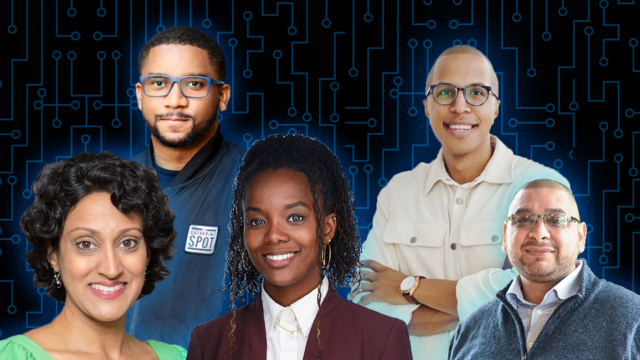 The staggering underrepresentation of people of color and women in the tech, startup, innovation and entrepreneurial spaces has been well-documented. Large companies promise they’ll do better, but still struggle to attract and retain diverse talent.

Diverse Disruptors is a podcast from 88Nine Radio Milwaukee about those leaders who found their own way to innovate and did so with inclusion and accessibility at the forefront.

Season two of Diverse Disruptors is presented by University of Wisconsin-Milwaukee, Northwestern Mutual and gener8tor, with support from Verizon, United Way’s Techquity and Alverno College.

Episode 1: Ruben Gaona, Co-Founder of The Way Out

Ruben Gaona co-founded the anti-bias employment platform, The Way Out, after experiencing struggles with reentry after being incarcerated. The Way Out specializes in the hiring of justice-involved job seekers, and also provides additional social services and technologies to help them integrate into new roles successfully.

Priya Amin is an entrepreneur, TEDx speaker and mother of two boys. After fighting to balance a career and parenthood, Amin started Flexable with the mission to make work and life fit better for professional parents. However, because of the effects of Covid-19 and the biases of the startup economy, Flexable is shutting down.

Henri Pierre-Jacques founded Harlem Capital with friend and colleague Jarrid Tingle in order to impact culture by investing in innovative companies led by women and diverse entrepreneurs. The firm has a mission of changing the face of entrepreneurship by investing in 1,000 diverse founders over its first 20 years.

As Managing Partner at Gateway Capital, Dana Guthrie generates social returns through investment in low-to-moderate income communities. Prior to her current role, Guthrie self-studied and founded Alchemy Angel Investors, an angel investment network focused on early-stage startups. She founded Alchemy while being employed full-time at a Fortune 500 company and managing a multi-million dollar, global product offering.

Episode 5: Ryan Wilson, Co-Founder and CEO of The Gathering Spot

Ryan Wilson is the co-founder and CEO of TGS Holdings, a consumer lifestyle and hospitality company based in Atlanta. The company’s holdings consist of The Gathering Spot, a private membership club; and A3C, a music, tech, and ﬁlm conference and festival. The membership club has established itself as a home for creatives, business professionals, and entrepreneurs and regularly hosts notable and culturally impactful events.

Episode 6: Chris Bennett is the Co-Founder and CEO of Wonderschool

Chris Bennett’s appreciation for education goes back to his parents, Honduran immigrants, who made sure he had access to an excellent education. Tarik sits down with the Wonderschool founder to talk about his journey, challenges and successes during this process.

Host Tarik Moody chats with Dorsh Deans, a musician turned UX architect. He is the founder of the AIXA — pronounced “Eye-Eesh-Uh” — an AI chatbot that “provides answers to common (and obscure) UI dev and UX design questions” while simultaneously challenging stereotypes of who holds knowledge.

Arlan Hamilton founded Backstage Capital to invest in companies led by underestimated founders, including women, people of color and LGBTQ+ founders. In a little over five years, the firm has invested in over 150 companies. Host Tarik Moody talks with Hamilton about the racial wealth gap, imposter syndrome, the future of crowd investing and her new book, “It’s About Damn Time.”

Host Tarik Moody talks with Nash Ahmed about his unique journey to raise $1.6M to launch his startup, Undock. Ahmed’s platform allows users to instantly schedule, host and document meetings in their networks. He explains how he beat the odds with fundraising and shares one critical piece of advice for founders.

At Milwaukee Excellence Charter School, every student in its middle and high school grades learns about computer science. Host Tarik Moody speaks with Founding High School Principal Lita Mallett to learn about her goal of quadrupling the number of Black students who take — and pass — the AP Computer Science exam in Wisconsin.

Ryan Johnson founded Cxmmunity to eliminate barriers to entry and underrepresentation in esports. He shares with host Tarik Moody how, through a unique partnership with Twitch and a growing list of HBCUs, his nonprofit provides underserved communities access within the gaming industry by sharpening STEM and business skills.

The Black Innovation Alliance is on a mission to ensure that Black ownership is increasing through equitable participation in the innovation economy. On this season one finale of Diverse Disruptors, Host Tarik Moody speaks with BIA Executive Director Kelly Burton, PhD, and Erin Horne McKinney, CEO of WomenVenture and founding member of BIA, about how this idea got started and why this alliance is so important now.