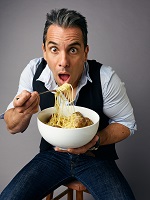 On the heels of a wildly successful start to 2018, comedian, actor, author Sebastian Maniscalco kicks off the fall leg of his blockbuster “Stay Hungry” international tour. The tour will make its way across the US and Canada with stops in Los Angeles, Las Vegas, Vancouver and Calgary. Maniscalco recently wrapped the spring leg of his tour with five sold-out shows at New York’s iconic Radio City Music Hall. People Magazine’s “The comedian’s comedian” broke the historic venue’s record with his appearances ranking him the highest grossing comedy weekend in their 85+ year history. Fans around the world hungry to see the performance will get their chance as the set was filmed for an upcoming Netflix special to air later this year. Details will be announced soon.

The tour title is appropriate as not only is “Stay Hungry” the name of his new 2018 book for Simon & Schuster, making the national best-sellers list, but it is also his personal motto.
Visit https://www.amazon.com/Stay-Hungry-Sebastian-Maniscalco/dp/1501115979.

Sebastian has made a deal with Lionsgate to develop a multi-generational comedy he will executive produce, cowrite with Austen Earl (The Great Indoors) and star in. Inspired by his stage routines, which touch on his Italian American family the script will follow two families from different worlds celebrating their first summer holiday together.

Maniscalco was included on Forbes’ 2017 list of “The World’s Highest Paid Comedians” where they praised, “thanks to his enthusiasm and willingness to work, Maniscalco will likely continue to be on Forbes’ list for years to come.” Dubbed “one of the hottest comics” by Newsday and “one of the funniest comics working stand-up today” by Esquire, Sebastian’s live performance has become a critically-acclaimed event, with the Los Angeles Times raving, “onstage, there’s an impatience to Maniscalco’s delivery as well, a hair-trigger exasperation with people and modern life, punctuated with baffled expressions, percussive thumps on the microphone and wide-swung leg kicks more associated with an Olympic speed-skater than a stand-up comic.”

Instead of asking questions – a theme that has served as the foundation for his previous comedy specials and shows like Aren’t You Embarrassed? and Why Would You Do That? – Maniscalco’s new tour has the affable performer instead encouraging fans to follow in his footsteps and “stay hungry.”