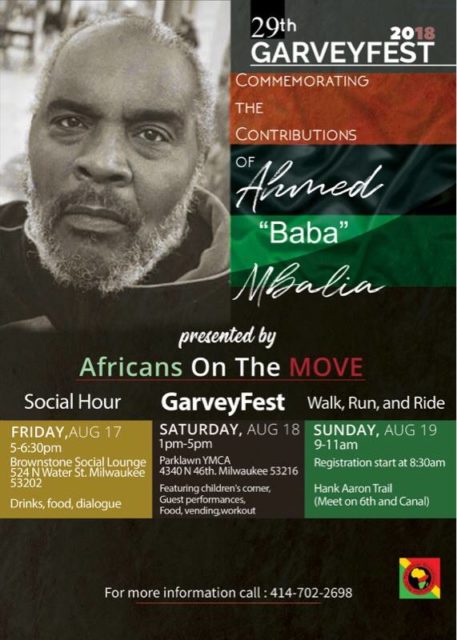 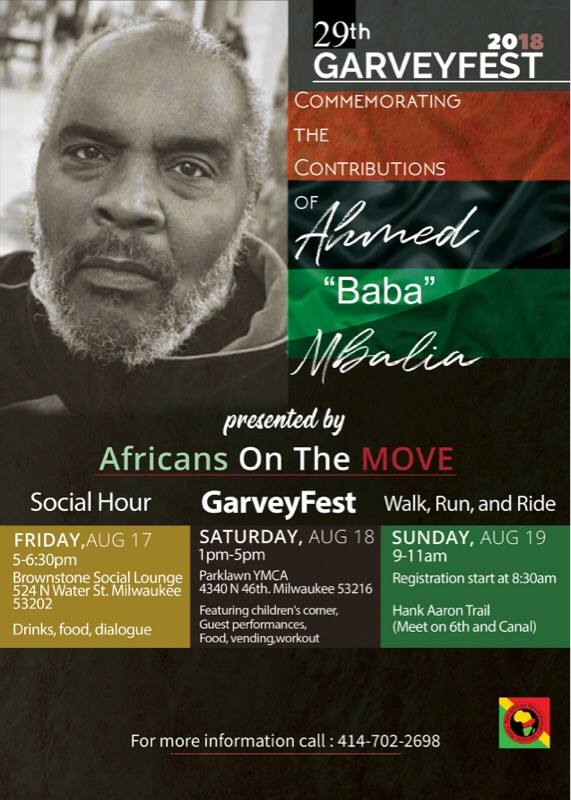 Do You Remember the U.N.I.A. and the Garveys?
GarveyFest 2018

The theme for this year’s celebration is “The Internal Enemy: African People’s Struggle against Our Own Weaknesses.” While we recognize that capitalism in all of its forms is our primary enemy, we want to focus on what Amilcar Cabral (African leader in Guinea Bissau, West Africa) called “the struggle against our own weaknesses,” highlighting those obstacles that are internal to the African nation, to us as a people, and which are obstructing our path to liberation. By focusing on our own weaknesses, we assure you that we are not losing sight of our principal enemy—capitalism. But we are acknowledging the fact that we can be assured of reaching our goal of complete liberation, a life free of exploitation and oppression, and reaching it much more quickly, if we address the internal weaknesses that are impeding our progress.

Please come out and help us celebrate. We hope that you’ll join us in our “Open Mic” commemoration of Ahmed “Baba” Mbalia by sharing the experience/relationship you had with him over the years.

Since 1988, many of our local artists have donated hours of their time to help make GarveyFest a successful annual event. They have agreed, once again, to do so this year. Come, listen to, and celebrate artists such as King Kamonzi and many more. Bring the children to our Children’s Activity Arena for science, art and history activities as well as free snacks and school supplies. Experience the delicious foods for sale and the many products offered by a variety of vendors at our African Marketplace.

Don’t forget to bring your blankets and lawn chairs! (In case of rain, the event will be held inside the Parklawn YMCA.)

Why don’t we know about the Universal Negro Improvement Association (U.N.I.A.)?

Let us answer this question first with a quote from Malcolm X: “By keeping us completely cut off from our past, it is easy for the man who has power over us to make us willing to stay at this level because we will feel that we were always at this level, a low level.” In other words, knowledge of the U.N.I.A. and the Garveys is food for liberation for the masses of people of African descent. For the capitalist ruling class, that is an undesirable reality.

What was the Universal Negro Improvement Association (U.N.I.A.)?

Enraged at the suffering of their people, on July 14, 1914, Marcus Garvey and a young Jamaican activist, Amy Ashwood, organized the Universal Negro Improvement Association—African Communities League (UNIA-ACL). The UNIA was designed to rebuild a positive social, cultural, psychological, and political life for African people around the world. The ACL was created to establish economic stability and independence in the African communities of the world. Amy Ashwood writes: “Our love for Africa and our concern for the welfare of our race urged us on to immediate action.”
The UNIA-ACL saw land as key to the liberation of an oppressed people and the only rightful land base that belongs to African people is Africa. Garvey wrote, “We are determined to solve our own problems by redeeming our Motherland Africa from the hands of alien exploiters and found therein a government, nation of our own, strong enough to lend protection to the members of our race scattered all over the world and to compel the respect of the nations and races of the earth.”
And thus began the effort of the UNIA-ACL to organize for liberation under the leadership of Marcus Garvey. The organization established the Negro World newspaper which was read globally and even smuggled into the apartheid state of South Africa. There were the Black Legionnaires who were the UNIA’s army in training. There was also a medical corps, all women, called the Black Cross Nurses.
The UNIA had members throughout the world numbering in the millions. By the mid-1920s, there were over 1100 UNIA branches in more than 40 countries throughout the Caribbean, Europe, South America, North America, and Africa. Included in the group were Elijah Muhammed, who would later become the leader of the Nation of Islam, and the parents of Malcolm X.
Clearly, the UNIA-ACL posed a major threat to the ruling class of the time. The UNIA was organizing and mobilizing a labor force that was being exploited by the capitalist ruling class worldwide. In addition, the organization sought to reclaim Africa as the land base for the liberation of African people. (Africa, of course, was and still is the richest land mass and is still being exploited by global capitalist forces.) It was because Firestone Rubber Corporation was raping Liberia of its rubber that it demanded that the U.S. government do something about Garvey. From the capitalists’ point of view, the Garvey movement had to be stopped.
The U.S. government assigned the destruction of the UNIA-ACL to a newly formed task force within the Justice Department. This unit was headed by the infamous J. Edgar Hoover. Hoover, using jealous “house negroes” within and outside of the organization, was able to convict, fraudulently, Garvey of mail fraud.
In 1925, Garvey was imprisoned by a U.S. federal court. He was released in 1927 and deported. Although the charges were shown to be phony charges, Garvey’s name has never been cleared in the U.S.
After his deportation, Marcus traveled throughout Europe and the Caribbean continuing to organize around his rallying cry, “AFRICA FOR THE AFRICANS, AT HOME AND ABROAD.” On June 10, 1940, Marcus Mosiah Garvey died in Europe from a stroke.

The Legacy of the Garveys and the U.N.I.A.

The final gift of the Garveys and the U.N.I.A. to their people is clear. They helped to educate their people about their noble identity as African people, challenging them “to rise up you mighty race.” Observing that “the powers opposed to African progress will not be influenced in the slightest by mere verbal protests,” they demonstrated the power and necessity of developing a revolutionary, not a reform, organization for the purpose of mobilizing for liberation. Marcus told his people “that you are a people most favorably suited for getting what you want through organization.” Most importantly, the Garveys and the U.N.I.A. inspired their people to work to reclaim and to unify their homeland Africa, no matter if they’d never see the day of its redemption: “All of us may not live to see the higher accomplishment of an African Empire—so strong and powerful, as to compel the respect of mankind, but we in our life-time can so work and act as to make the dream a possibility within another generation.”

Who is Africans on the Move?

Africans on the Move is a non-profit organization comprised of African people born throughout the world. Its chief goal is to provide African people with educational information and cultural events that push forward their struggle for liberation.