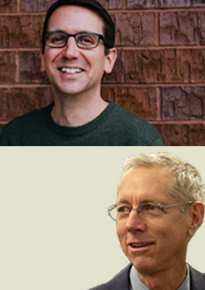 Give What You Can

Join us for a night of poetry with Tyler Farrell, celebrating the publication of Stichomythia (Salmon Poetry, 2018) & Jim Chapson, Milwaukee Poet Laureate, 2013-2015!
Born in Illinois in 1973, Tyler Farrell received his undergraduate degree at Creighton University, Omaha, Nebraska where he studied with Eamonn Wall. In 2002 he received his doctorate from UW-Milwaukee where he studied with James Liddy. He has published three books with Salmon Poetry: Tethered to the Earth (2008), The Land of Give and Take (2012), and Stichomythia (2018); and has contributed a biographical essay on James Liddy for Liddy’s Selected Poems (Arlen House, 2011). Farrell is currently a visiting assistant professor at Marquette University where he teaches classes in writing, poetry, drama, film and literature and leads two short-term study abroad programs, one to Ireland and the other to London. His Morrissey imitations are said to be legendary.

Jim Chapson is the author of several poetry collections, including Plotinus Blushed (2013) and Daphnis & Ratboy (2009), both from Arlen House, and has had poems included in two recent anthologies: Jack London is Dead: Contemporary Euro-American Poetry of Hawai’i; and Imagining the Jewish God. Chapson served as Milwaukee’s Poet Laureate from 2013 to 2015.