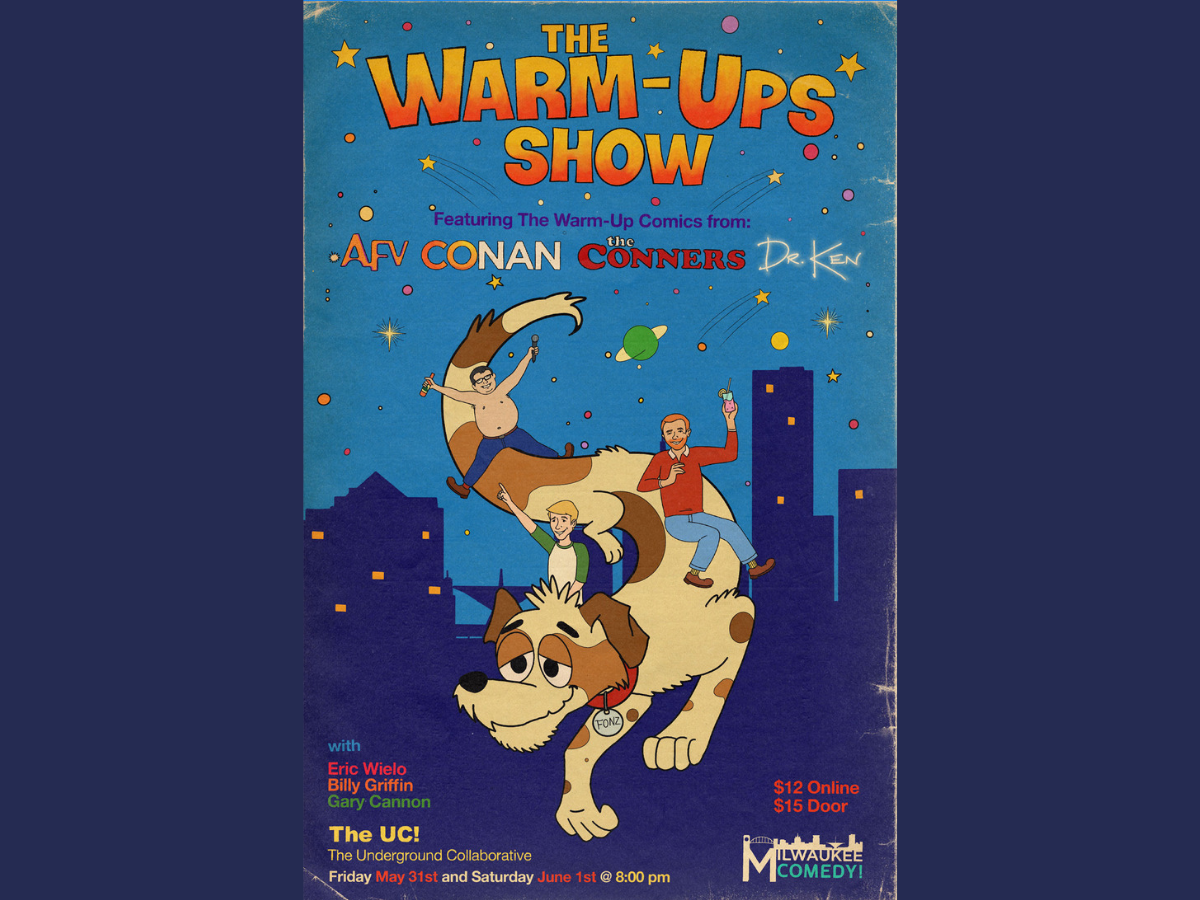 Meet the warm-up comics of Los Angeles who get the crowds roaring before the cameras start to roll!

Nationally touring comics Gary Cannon, Eric Wielo, and Billy Griffin travel to Milwaukee to present: “The Warm Ups-Show”: A two-night-only special event at The Underground Collaborative, Friday May 31st-June 1st. With years of experience warming up the live studio audiences for such shows as “CONAN”, “Chelsea Lately” “America’s Funniest Home Videos”, “Craig Ferguson”, “Dancing with The Stars”, “The Bachelor”, Bob Saget’s “Video’s After Dark” and “America’s Got Talent”– you’re sure to be on the edge of your seat through their combination of crowd work and off the cuff absurdity.

Tickets are only $12 pre-sale and $15 at the door! Grab yours now before they sell out!

About Gary Cannon:
His amazing crowd work skills have enabled Gary to become one of the most in demand warm-up comics in Los Angeles. He was the master at warming up the studio audience for shows like The Late Late Show with Craig Kilbourn, Craig Ferguson, Last Call with Carson Daly, Dancing with the Stars, Chelsea Lately and Americas got Talent. Currently, Gary warms up the crowd for “CONAN” on TBS and the majority of your favorite comics stand-up specials.

About Eric Wielo:
Eric Wielo is a stand-up comedian, improviser, and writer originally from Milwaukee, Wisconsin. He’s been a member of the CONAN (TBS) production staff for the past eight years. His TV credits include: Saturday Night Live, The Tonight Show with Jimmy Fallon, Late Night with Seth Meyers, The 75th Annual Golden Globe Awards, The 70th Annual Emmy Awards, The Break with Michelle Wolf, The Tonight Show with Conan O’Brien, The Pete Holmes Show, and Disney’s Annual Thanksgiving and Christmas Holiday Specials (ABC). He recently performed on the TBS sponsored Main Stage at the New York Comedy Festival and has also performed in the LA and San Francisco Comedy Festivals.

About Billy Griffin:
Billy Griffin is currently the Audience Warm-Up Comedian for “America’s Funniest Home Videos” and Bob Saget’s new ABC show “Videos After Dark”. He has performed stand up all around the country including The Laugh Factory (Hollywood), Laugh Boston, The Funny Bone (Columbus), and many more. His comedic roots stem from his time at The Second City in Chicago where he completed the Improv Program, and Second City Hollywood where he completed The Conservatory Program.