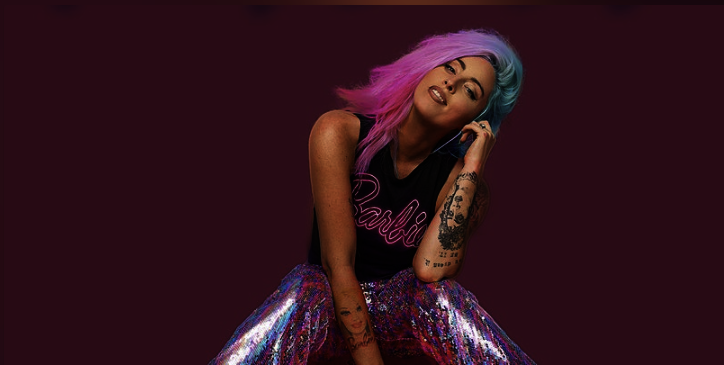 This WILD CHILD was raised on a well balanced diet of Pat Benatar and a plateful of glitter. She has left memorable impacts on stages from Los Angeles to New York — with stops at “American Idol” and “Whisky A Go Go” in between.

Her live show is a full blown, fully choreographed, backup dancer, pop-rock production. Think Lady Gaga meets Joan Jett with a bit of P!nk sprinkled on top. She’s as sweet as she is edgy – and audiences across the nation can’t get enough of AVP.

Alisabeth is now touring on the heels of her album “Diamonds In the Blackout”, most recently playing a show for over 16,000 in June of 2019 and for over 38,000 in August.

This midwestern girl performs with a flair for the dynamic and theatrical – and as one critic wrote “AVP is keeping glitter rock alive with powerfully personal lyrics and all the glam and glitz you could want”.

With her live shows drawing rave reviews, this girl is a performer to watch — that is, if you aren’t too busy Rocking out!!

“It’s life-affirming but it doesn’t put up with anybody’s sh*t.”

“Dance music at its most pop-forward, filtering the singing-into-a-hairbrush exuberance of classic Madonna through the half-rapped/all-attitude mentality of Kesha, with a little bit of Beyoncé’s no-nonsense politics thrown in.”

The LOL are a dance pop band from Milwaukee, WI.

They have played locally and nationally and have been a featured act at Summerfest, Milwaukee PrideFest and Riverwest FemFest.

Their debut album, Dance Music Saves Lives, is a love letter to the dance music we grew up with, and its power to transform and heal us.