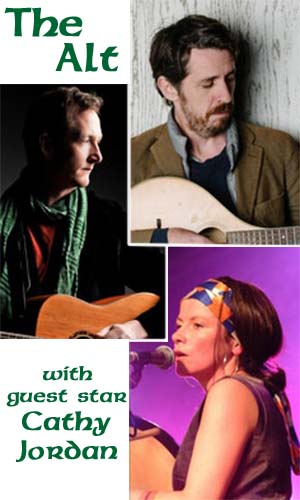 Among the leading lights of today’s folk and Irish music scene, The Alt will perform on Saturday, April 21 at the Irish Cultural and Heritage Center, 2133 W. Wisconsin Ave., Milwaukee, at 7:30 p.m.

Joining John Doyle and Eamon O’Leary will be special guest Cathy Jordan from the band Dervish.

Each member is critically acclaimed for their instrumentation and collaborations with many of the greatest names in Irish music. The group’s name comes from a storied glen on the side of Mount Knocknarea in Ireland’s County Sligo where they first gathered to rehearse. The old ballads, tunes and freshly discovered songs they brought to the table allowed them to touch something beautiful, deep and magical that has always run beneath the music.

“Doyle on guitar has risen to a level occupied by him alone,” according to music critic Earle Hitchner. Originally from Dublin and now living in North Carolina, the Grammy-nominated instrumentalist was a member of Solas and has toured with  Karan Casey,  Liz Carroll and Joan Baez, among others. Shadow and Light, Doyle’s solo recording, showcases his talents as songwriter and singer.

Originally from Dublin, guitarist and bouzouki player O’Leary has toured extensively throughout North America and Europe with many of Irish music’s well-known players and is one-half of the duo the Murphy Beds with Jefferson Hammer. Known for his singing and songwriting, the Huffington Post described the duo’s self-titled CD as “ten beautiful, crystalline songs.”

The Roscommon-born front woman for the iconic Irish band Dervish, Jordan is celebrated for her singing, bodhrán playing and masterful stage presence. According to The Scotsman, “She is a singer of extraordinary intensity… her voice sublimely delicate without being remotely fragile.”

This concert is supported in part by a grant from the Wisconsin Arts Board with funds from the State of Wisconsin and the National Endowment for the Arts and by a grant from the Irish Fest Foundation. The Irish Cultural and Heritage Center supports the Irish community by serving as a venue dedicated to enhancing, promoting and preserving Irish culture and  heritage along with serving the community at large. The center, housed in the landmark 1880’s former Grand Avenue Congregational Church, is the site for concerts, art exhibits, Irish dances and genealogical research.