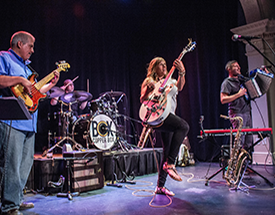 Kick off the 2018 Sturgeon Spectacular with this THELMA favorite in the Great Hall. This free concert by Copper Box includes, again, the opportunity to Kiss the Sturgeon!

Danny Jerabek (accordion, keys, percussion, vocals, cornet, sousaphone, etc.) and his wife, Michelle (Thull) Jerabek (bari saxophone, vocals, guitar, percussion, etc.) both started performing with their family on stage at an early age. Once in their teens, they crossed paths again and eventually realized they were meant to be together. They started writing songs and formed a band and the rest is history! The current line up includes the highly regarded talents of Dan Cable (drums, percussion) and Dave Chyla (bass, guitar).
Danny Jerabek was given an accordion from his grandfather at age 9 and taught himself how to play it. Inspired by Steve (Esteban) Jordan, “the Jimi Hendrix of Tejano Accordion,” he began to “rock out” and improvise –thinking a little more, “outside the box.” He has been featured at the International Accordion Festival in San Antonio, TX, and the National Accordion Festival in Houston, TX, and the Cotati Accordion Festival in Cotati, CA, and has been featured on national TV. In 2015, Danny accepted an Artist Endorsement deal with Hohner Accordions, INC.