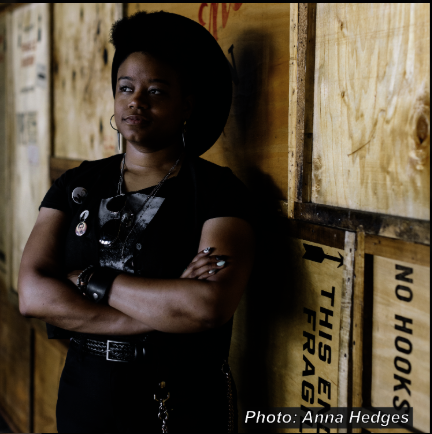 Amythyst Kiah’s commanding stage presence is matched by her raw and powerful vocals—a deeply moving, hypnotic sound. Born in Chattanooga and now based in Johnson City, Amythyst Kiah ’s commanding stage presence is matched by her raw and powerful vocals—a deeply moving, hypnotic sound that stirs echoes of a distant and restless past.
Accompanied interchangeably with banjo, acoustic guitar, or a full band, her eclectic influences span decades, finding inspiration in old time music, alternative rock, folk, country, and blues.
Our Native Daughters, her recent collaboration with Rhiannon Giddens, Leyla McCalla, and Allison Russell (Birds of Chicago), has delivered a full-length album produced by Rhiannon Giddens and Dirk Powell, Songs of Our Native Daughters (out now on Smithsonian Folkways). NPR described the opening track, Black Myself, written by Amythyst, as “the simmering defiance of self-respect in the face of racism.” The supergroup hit the road in July 2019 with a series of special dates that included performances at Washington D.C.’s Smithsonian Museum of African American History & Culture as well as Newport Folk Festival. Most recently, the group was nominated for Duo/Group of the Year at the 2019 Americana Honors & Awards.
Amythyst regularly tours the United Kingdom and has performed at Celtic Connections, Southern Fried Festival, Cambridge Folk Festival, the Edinburgh Jazz & Blues Festival, and SummerTyne Americana Festival. She is a crowd favorite at Bristol Rhythm & Roots Reunion in the U.S. and has shined at the John F. Kennedy Center for Performing Arts, Smithsonian Folk Life Festival, Winnipeg Folk Festival, and opening for artists such as the Indigo Girls, Rhiannon Giddens, Dom Flemons, Old Crow Medicine Show, First Aid Kit, Darrell Scott, and Tim O’Brien.
Provocative and fierce, Amythyst’s ability to cross boundaries is groundbreaking and simply unforgettable.

Nickel&Rose is an American folk-music duo made up of Upright Bassist Johanna Rose and Guitarist Carl Nichols. They formed in the summer of 2016 and spent their first winter and the following spring traveling Europe, playing dozens of shows in France, Czech Republic, Germany, Romania, Poland, and Ukraine. While in Berlin they recorded their EP, Oh Sweet Love, released in April 2017. Oh Sweet Love, is a sweet-sounding auditory souvenir of Nichols’ and Rose’s four month European journey and a recorded testament to the two-piece’s ability to turn tough times into something vibrant with help from a traveling companion.

Nickel&Rose have influences that span the spectrum of American music. Carl’s background brings elements of West African music and Blues while Johanna brings her experience playing Bluegrass, Folk and Jazz. From loss to heart break to love, Nickel&Rose address the human experience with gentle harmonies and soul stirring cries. With a shared appreciation for traditional music and a desire to break rules, the two have have created a unique sound that embodies Americana’s past and future.
“‘Americana’ reminds me of the true power of songs: while I could write pages and pages about the issues this song raises, Nichols and Rose distill the story to such a fine point that it truly takes my breath away and makes the hairs on my arms rise whenever I listen to it.” [8/16/18]