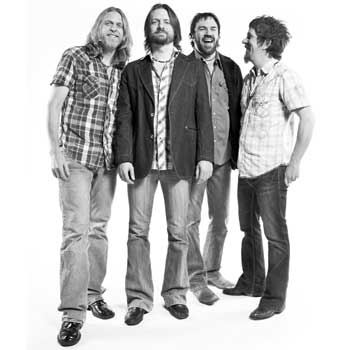 March 16, 2018 8:00pm $15.00
Although The Steepwater Band got their start as devotees of delta blues, they have since been expanding on their influences taking on everything from psychedelia to Americana, and of course, rock and roll music. Formed in Chicago in 1998, the band’s signature sound is at once a nod to earlier rock n’ blues combined with a raw and gutsy musical approach. Founding band members Jeff Massey (vocals & guitar), Tod Bowers (bass) and Joe Winters (drums) have a synergy that comes from years of playing together. In early 2012 the long-time trio have been joined by Eric Saylors (guitar & bk vocal), from Indianapolis, IN. Mr. Saylors brings an added depth to the TSB LIVE sound, where the foundation laid by Bowers & Winters leaves the space for the guitars to soar and vocals to shine. Massey always performs with a passion that can belie his virtuosity, while being true to the song at hand.