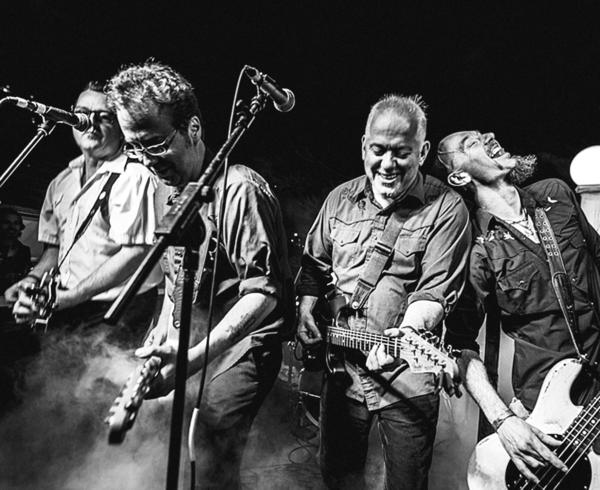 $10 tickets available on Eventbrite here and $12 door–
The line-up– Jon Langford (Mekons, Pine Valley Cosmonauts), Steve Goulding (Mekons, Pine Valley Cosmonauts, Graham Parker & the Rumour), Alan Doughty (Jesus Jones, Dollar Store), Deano (Dollar Store, Wreck), and Tracy Dear (World’s Greatest Living Englishman). Often filling in for Goulding on the Wacos’ Midwestern jaunts is Joe Camarillo (Hushdrops).
The Wacos race towards the crossroads of punk and country, heedless of speed limits and stop signs. The collisions spectacular, loud, energizing and sometimes messy. We’ve seen them a two hundred and forty six times, and the Waco Brothers never fail to entertain. Subtlety is for the weak, so they’ve chosen the path of optimum mayhem and tomfoolery. In their rollicking career, they have been called everything from the flagship act of the alternative country “movement” to pure butchery. Both are likely to be correct, even within one evening.
When the Wacos hit the stage, they play as if their lives depend on it. Their shows at SXSW and CMJ are legendary, and every year threaten to actually collapse under the weight of their runaway brilliance. If you’re not drunk, sweaty, and exhilarated at the end of one of their shows, then brother, we pity you. You might want to get back to the safety of that couch of yours.
RECOMMENDED IF YOU LIKE:
The Clash
The Pogues
Mekons
The Hold Steady
Jason & the Scorchers