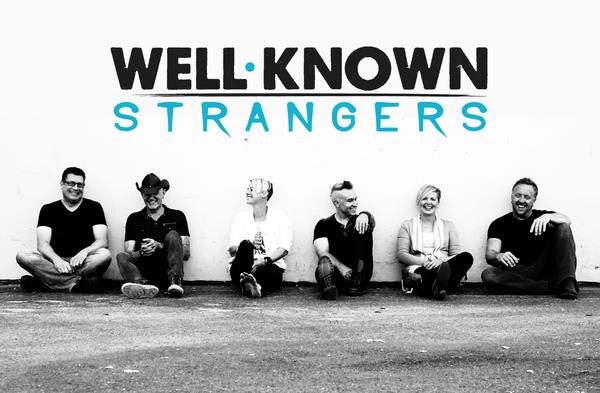 Well-Known Strangers has been entertaining Midwest audiences with a cello infused, alternative pop/rock, with a tinge-of-country-band sound. Members Joe Adamek (acoustic guitar), Betsy Ade (lead vocals, guitar), Sacia Jerome (cello, background vocals), Theodore Koth (lead guitar, background vocals) Roger Gower (drums/percussion) and John Kulas (bass guitar) have been busy preparing for the release of their next EP “Path Away” on May 4, 2018. Together, the band members have an amazing mix of musical knowledge and education that provides a unique sound that is reminiscent of familiar of music from the ‘90s while being expressively groundbreaking and melodically rich. While Ade and Adamek do most of the songwriting, it’s the band’s creative spark and sonic diversity that are the driving force behind their sound.

Well-Known Strangers grew out of a 15+ year friendship between Ade and Adamek. In fact, it was Ade, who in 2009, sang backup vocals on the song “Storm” that Adamek co-wrote for artist Mark Harrod. Then, after performing at a mutual friend’s wedding in May 2014, the two discussed the possibility of a music collaboration and began seeking out talent. In February 2015, Well-Known Strangers were born. Their name comes from the idea that they were all individually “well-known” in the local music scene when they got together, but on a personal level some of them were “strangers” to one another.

Well-Known Strangers are proud supporters of the fight against Human Trafficking, LGBTQ community, and the ongoing battle against Cancer.

Ade’s rich lyrical gifts are essential and her vocal delivery is simply unmatched in contemporary pop/rock music. A proud member of the LGBTQ community, Ade is passionate about cancer research, after losing her mother to Hodgkin’s disease when she was just 9 years old. In 2004, Ade won the Wisconsin Area Music Industry’s (WAMI) “Female Vocalist of the Year” award and in 2017 won Shepherd’s Express “Best Female Vocalist”.

Well-Known Strangers have been recognized through numerous awards and nominations, including the following (in addition to those listed above): Winner of 2017 Milwaukee A-List “Best Local Band”, Runner-up for 2017 Shepherd Express “Best Band”, and up for two (2) 2017 WAMI awards, “Best Rock/Pop Band” and and WAMI People’s Choice Award for “Best Band”. Well-Known Strangers music can be found on iTunes, Spotify, and Amazon and heard on Pandora and Apple Music.