Sarah Perry At The Laughing Tap!! In Person and Live Stream!!!

Sarah Perry At The Laughing Tap!! In Person and Live Stream!!! 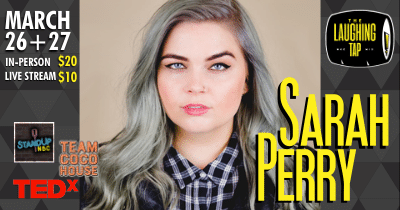 Sarah Perry is a Chicago-based comedian/writer whose fearless delivery and subject matter is highly relatable and resoundingly funny. Sarah graduated from Columbia College Chicago in 2016 with a degree in Comedy Writing and Performance and has also completed The Comedy Studies program and graduated from The Conservatory at The Second City, as well as the improv program at iO Theatre. She has produced multiple successful shows in Chicago including the Laugh Factory’s Drink Date Laugh on Fridays and her very own creation: Boy/Girl Sleepover. She gained Internet attention when Laugh Factory Hollywood posted videos of her stand-up online, racking up a total of over 4.3 million views on Instagram and Youtube. Sarah has also recently lent her writing and acting chops to WGN’s Man Of The People, a late night show hosted by Pat Tomasulo. She has opened up for Natasha Leggero, Michael Kosta, Chris Redd, Jeremy Piven, Esther Povitsky and more. She performed in The Laughing Skull Comedy Festival in Atlanta, GA in May 2019 and in June 2019 she was named a semifinalist for StandUp NBC. In November of 2019 she performed a TEDx Talk for her Alma Mater, Columbia College Chicago and in January 2020 she performed at Team Coco House in Chicago.

Tickets are $20 in person with limited seating or Live Stream for only $10/ household!

Live stream details! If you purchase the Live Stream the day of the show, the link will be included in your order confirmation email. Otherwise, it will be emailed to you at 7pm CST the day of the event (check your spam folder!). Tickets are ONLY $10 per household and the live stream show will start at 8pm CST (with the camera turned on a few minutes before so you can get comfy!)