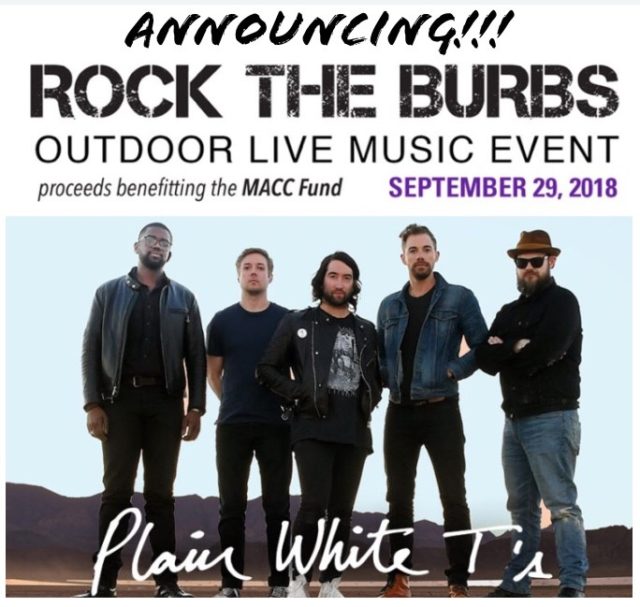 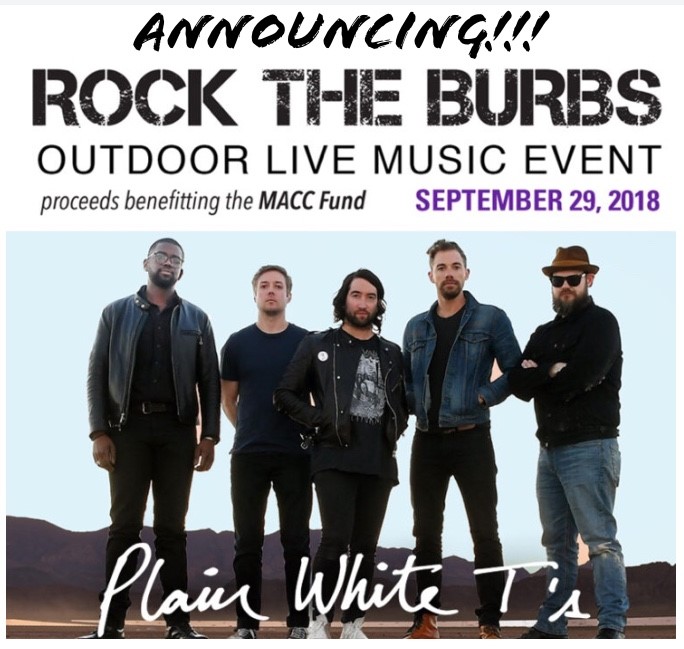 Rock the Burb’s goal is to bring fabulous entertainment to the surrounding suburban Wisconsin areas and connect people together through music. Our next event will take place at The Corners of Brookfield on September 29, 2018.

Plain White T’s kicked off their vibrant career in the Chicago suburbs in 1997, playing a unique blend of pop, punk, and melody-driven rock and roll. Two decades later, the quintet has become a global success, with thousands of shows, a string of multi-platinum hit singles (“Rhythm of Love”, “1, 2, 3, 4”) and one of the most downloaded songs of all time under their belts: GRAMMY-nominated “Hey There Delilah.”

In total, the band has released seven full-length studio albums, creating epic rock songs and acoustic-leaning ballads that have made them a household name.
Now, Plain White T’s are thrilled to return to Fearless Records for the next exciting chapter of their career with a brand-new single called “Land of the Living”. “It’s about following your passion no matter what, and enjoying the ups and downs along the way.”

Listening Party, a 2018 Wisconsin Area Music Industry (WAMI) nominee for Bluegrass/Americana, have found a place in the original music scene around the Midwest with their soulful stage presence and infectious melodies. The trio out of Milwaukee, WI present a fresh brand of Americana music that feeds from folk, classic rock, soul and bluegrass. Singer-songwriter Weston Mueller, a Northern Wisconsin native, leads the group with “every note full of expression and feeling” (Milwaukee Journal Sentinel).

Abby Jeanne is a songwriter, singer,and producer originally from Milwaukee, Wisconsin. In 2010 she hit the road in her mini-van to begin her musical journey With her first demo and Band Eden-Abby. She spent the next 4 years traveling around america and europe as a solo artist exploring her creativity and finding her voice.

In 2016 she formed her band, and in February 2017, she released her debut album “rebel Love’. She has spent the rest of 2017 playing her music at many festivals and clubs of the Mid-west, Europe, India, and Thailand.

Abby personally describes her music as “rock n’ roll with a dreamers soul”, and she hopes that her music and poetry guide listeners into her transcending reality.