The light (and occasionally dark) side of ‘Toy Story 4’

The light (and occasionally dark) side of ‘Toy Story 4’ 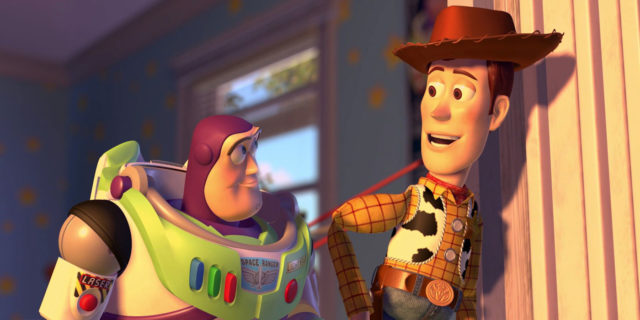 On this week’s episode, we’re sharing our thoughts on the latest installment of Pixar’s blockbuster franchise “Toy Story,” which detoured into some surprisingly dark directions for a children’s movie. But was it any good?

Are you not familiar with The Story of the Toys?! It is a sweeping epic of fantastical playthings made manifest by, we can only assume, the workings of the devil himself! Just kidding.

The Toy Story series has broken out of the usual mold for a kids’ film series.  Not only does it seem to make more and more money with every incarnation, but the third film (usually the one that makes you go, “OK, I think that’s enough”) became a favorite to many who saw it. So, why not another one? Let’s keep this whimsical train on the whimsical tracks!

In the newly arrived fourth film we see Woody trying his best to acclimate a new addition to the fold — Forky. Forky is a spork (should have been called Sporky, right?!) that young Bonnie made at school. Forky isn’t sure of his place in this new world. Is he a toy or is he — as his mantra demands — “Trash!”

While the film explores the usual themes of friendship, childhood and teamwork, they’re also seeing some darker tones being let into the usually light film. There is a sort of horror house element to a few sequences, as well as a common theme of “giving up.” Very edgy for a box office goliath series to suddenly get a little bit emo.

But, was it as good as the rest? Better? Unnecessary? Were there any breakout characters that stole the show? Hey, hey! These are all great questions. You can find out all the answers and more in this week’s Cinebuds podcast! Enjoy!