5 things I learned about Milwaukee from playing Pokémon Go

5 things I learned about Milwaukee from playing Pokémon Go 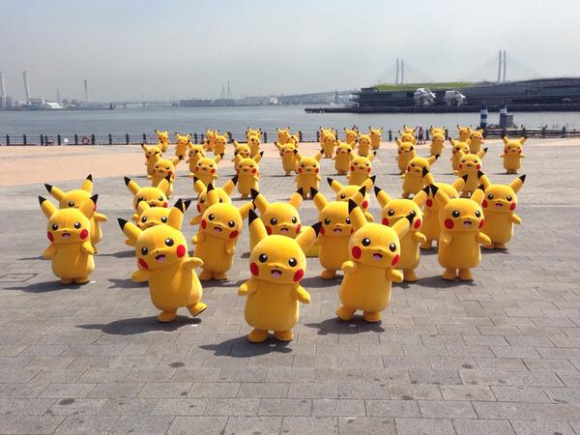 Still swiping for Pokémon? Yeah, us too. But surprisingly, while running all around the city, we’ve actually learned quite a bit about Milwaukee history from the various Pokéstops.

…like did you know one of the biggest inventions (like, of all time) was created right by the UWM Panther Arena?

Or that there once was a live duck on display at  a department store in Downtown Milwaukee?

Get those berries and spare Pokéballs ready, here are 5 things we learned about Milwaukee from different Pokéstops:

1. That duck on the Riverwalk by Wisconsin Ave is more than just a cute statue.

In 1945, Milwaukee Journal writer Gordon MacQuarrie published a story on Gertie, a mother duck, who had laid eggs under the Wisconsin Avenue bridge. And during a time of depression and war in our nation, the city of Milwaukee really just gravitated towards this and found hope in those little nine eggs waiting to hatch. …And, I mean, people got really into it. Mothers Day cards were placed near the nest, Boy Scouts kept a lookout and gave updates on the eggs, and this little nest brought hundreds of visitors. After making national news, this “duck frenzy” grew even bigger once the eggs hatched; the chicks were even temporarily put on public display at the Gimbels department store window.

2. Over 20,000 Civil War soldiers were cared for on Plankington Ave.

Pokéstop 2: Between Wells and Wisconsin

In April 1864, a group of women opened a temporary Civil War Soldiers’ Home on Plankington Avenue between Wells and Wisconsin: the Wisconsin Soldiers’ Home. After only 3 years of operating, this “temporary” home welcomed 21,550 Union soldiers, gave medical care to 1,000, and provided over 150,000 free meals.

3. The first typewriter was invented by (what is today) the UWM Panther Arena.

In 1869, C. Latham Sholes perfected the typewriter at 318 State Street, right by what is now the UWM Panther Arena.

Over the next six years, he and his partners further developed it and eventually passed it over to James Densmore, who eventually sold this perfected typewriter to Remington & Sons in New York.

3. Seven pear trees were planted in Bay View in remembrance of the Bay View Massacre.

On May 1886, seven Milwaukee citizens were killed in what is known today as the Bay View Massacre. Nearly 1500 strikers from around Milwaukee marched near the Milwaukee Iron Company in fight for an eight-hour work day, and eventually the local militia was called to the scene and fired into the crowd.

Today there are seven flowering pear trees in Bay View along with a plaque in remembrance of the seven that lost their lives during the massacre.

4. There’s more to this Walker’s Point mural than meets the eye.

With help from The Native American Awareness Project and the Milwaukee Satellite Gallery Project, this mural by Mark David Gray stands as one of the many installations found around the Milwaukee area with the hopes of illustrating the Native American ties to the culture and history of Milwaukee. Despite only 1.1% of Wisconsinites who are American Indian or Alaska Native living in Milwaukee, local art like this allows their voices remains part of the city.

5. The Pabst Theater was one of the first all-electric theaters.

After the initial theater was destroyed by a fire in 1895, the current theater, designed by Otto Strack, was completed in just six months.

Opened on November 9, 1895, this new Pabst Theater was one of the first all-electric theaters and included new innovations such as air conditioning and (thankfully) fire-proof construction.