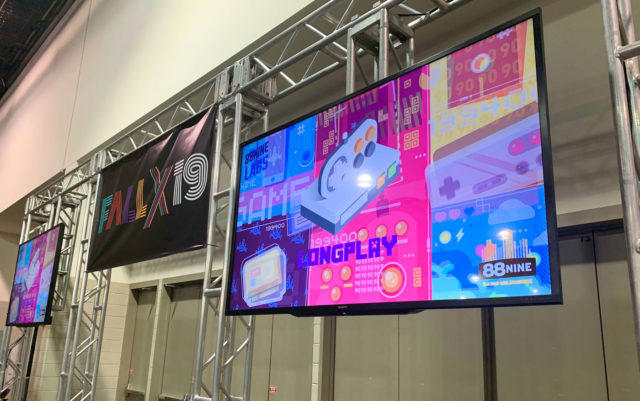 Back on Oct. 4 and 5, 88Nine Labs hosted its first-ever video game festival called Longplay as part of the Fall Experiment. The festival consisted of gaming tournaments, panels, talks and an area to just hang out play video games.

88Nine Labs wanted to create a unique gaming experience that was inclusive and diverse and looked at gaming holistically, which is rare for the Midwest region as a whole. Most don’t know that the gaming industry has earned more income than the movie and music industry combined. 88Nine Labs want to show that there are a lot of opportunities for students, entrepreneurs, and brands in Milwaukee in the gaming industry. We wanted Longplay to be a catalyst for this discussion.

We kicked off Longplay with a collaboration with Fall Experiment’s STEM programming. We invited Madison game studio Filament Games to talk about their VR game Breaking Boundaries to students.

Breaking Boundaries immerses players in the life and times of famous figures like Jane Goodall, Marie Curie and Grace Hopper. Players will explore each scientist’s real-life work environments and will gain an intimate knowledge of their lives and achievements through fully voice-acted vignettes that are steeped in historical context.

Filament Games’ James LaPierre discussed the game creation process, with an emphasis on learning and persevering through failure.

The next panel dealt with creating communities online and in real life and was moderated by Lynn Richter. They discussed the work that goes into creating events and online communities that bring people together and keep them coming back.

Later that day, Longplay hosted a live podcast recording with Milwaukee Institute’s Kathleen Gallagher, Golden Angel Investors’ Tim Keane and Justin Beck, CEO of Madison’s PerBlue. They discussed the mobile game industry. In 2016, PerBlue sold their game “DragonSoul” to GREE International for $35 million. And in 2018, they partnered with Disney to create the mobile game “Heroes: Battle Mode.” During the discussion, the panelists discussed how PerBlue builds games that achieve such a high level of success.

Mobile gaming accounts for about 60% of market share in gaming spend in 2019, which adds up to about $95.4 billion in revenue according to a report from Liftoff.

Then I moderated a panel titled “The Future of Music in Gaming and Esports.” My panelists included Joshua Remsburg from Capitol Records, HipHop Gamer from New York’s Hot 97, NWA founding member Arabian Prince, Bottlespark founder James Thompson, and video game music composer Chase Bethea. We discuss all aspects of music and gaming from licensing to music discovery to bring gaming into music festivals and more.

The opportunities for music discovery in gaming is growing every day. For example, the number one jazz album on the Billboard charts came from the video game “Cuphead.” And most recently, CHRVCH’s latest song will appear on the soundtrack for the game “Death Stranding.” Even there are labels dedicated to music and gaming such as the new imprint Lost Rings. Capitol Records is even building its own game streaming studio inside its iconic headquarters in Hollywood.

Other highlights of Longplay included a panel discussion on the mental health benefits of gaming moderated by Lynn Richter and Shareef Jackson. Panelists included Stephen Machuga and Mathew Bergendahl from Stack Up, a non-profit that uses gaming to help veterans and military personnel with PTSD, anxiety and depression; She Snaps a twitch streamer who in addition to streaming video games, she talks about mental health issues on her stream.

Check out this inspiring story about how gaming helped one veteran dig out of depression. You can also read this study on the benefits of gaming on mental health. Video games have also helped me with my depression and anxiety as well.

Longplay also addressed accessibility in video games with the panel “The Contemporary State of Gaming.” The panel was moderated by IndependenceFirst’s Chris Hege, who runs their esports program. The panel discussed accessibility, trends, online experience, pro-gaming and equity in the virtual world.

During the past Super Bowl, Microsoft released a commercial showing off their new adaptive controller, which allows people with a variety of disabilities to play video games.

Another panel discussion tackled the issue of diversity and representation in gaming and esports or the lack of. We kicked the panel discussion off with a screening of a short film called “Gamers” by Pixar’s Searit Huluf and Tiahja Nakahara. Panelists also included Alexa Lopez from i.c. stars, Shareef Jackson, Bryant Wilcox owner of Milwaukee’s Battlebox studios on the north side, and Sugargamers’ co-founder Jennifer Tonge, an organization based in Chicago that advocates for better representation in the gaming industry.

Recently, we have seen more people of color as major characters in big-budget video games. For example, the upcoming Marvel Avengers video game protagonist will be Ms. Marvel, who is a young Muslim woman with powers. But a lot still needs to change.

We also had a panel discussion about the variety of career opportunities in the gaming industry. Panelists included Milwaukee Street Fighter pro-gamer Dave Edwards, Cayle Drabinksy from Bucks Gaming, Hot 97’s HipHop Gamer, the owner of Tier 1 gaming lounge Jordan Tian and more. There are so many career opportunities in video games from developer, musician, journalist, professional gamer and more.

Another conversation we had at Longplay dealt with Twitch and video game streaming. One of the panelists was Jonathan Brostoff, a Wisconsin Legislature and Twitch streamer, who plays Magic The Gathering and has a decent following. Other panelists included Lynn Richter, She Snaps, Bottlespark founder James Thompson, and Shareef Jackson, who is part of a weekly Dungeons & Dragons stream on Twitch. They discuss everything on how and why to stream to how to make money from streaming.

The second talk dealt with esports and gaming at the high school level and the benefits for students’ overall education. The talk was called “Esports and the Scholar Gamer” and it was presented by James O’Hagan, the esports director for Racine Unified School District. He presented that using video games and esports in a strategic way can help a student in a variety of ways from socializing to their education and beyond.

Definitely check out James’ podcast where he talks about all aspects of esports.

Longplay also hosted a showcase highlighting indie game studios from Madison, Milwaukee, and Chicago. There was even an African-American owned studio from Milwaukee as part of the showcase. Here were the studios that were at the event:

Longplay in conjunction with I Play Games hosted four tournaments. One of the tournaments was Smash Bros competition between four non-profit youth programs — IndependenceFirst, ACLU, Teens Grow Greens and Islands of Brilliance. The other tournament was a partnership with Battlebox Studios, an African American owned game store on the north side.

As you can see, video games are more than just fun. It can help with mental health, it can be used for music discovery, it can be used to bring diverse people together, and it can create careers.

In a recent report from Wallethub, Milwaukee was ranked 78 on a list of the top cities for gamers and that included a rank of 45 for the best gaming environment. Gaming can help Milwaukee grow into a tech hub if it embraces the possibilities that are out there instead of sitting on the sidelines. Cities like New Orleans and Atlanta offer tax credits to creative industries like gaming to attract talent. Not only that, gaming could give youth opportunities to learn about technology, science and art but more importantly, it can give youth the skills they need in an ever-changing world.