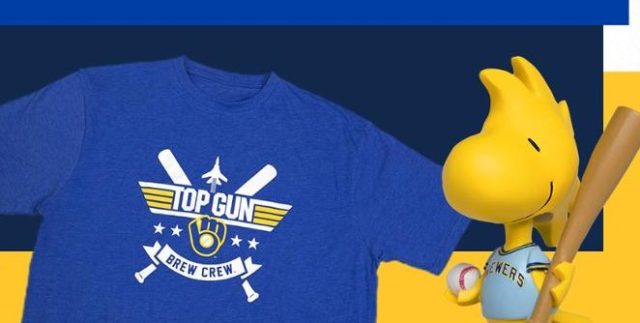 Not even a week removed from their announcement of a stellar 2020 lineup of promotional giveaways, the Milwaukee Brewers are back to announce more goodies exclusive to Miller Park for their 50th anniversary season.

Whereas the previously announced giveaways are free to a select number of ticketed fans, Theme Nights and Community Nights are unique in that they require a special ticket package to receive the giveaway along with a seat. Moreover, the game is transformed to reflect the theme or community of the night through special entertainment between innings, characters roaming the park, an altered in-stadium soundtrack and more for those without a special ticket to enjoy.

In addition to the previously announced Star Wars Night on May 9 (which includes a STELLAR Jedi Lorenzo Cain bobblehead), highlights include: a Woodstock bobble for Peanuts Night on April 11 to complement the Charlie Brown and Snoopy ones from years past, an Elmo bobblehead for Sesame Street Day on June 27, a mysterious, limited edition WWE item for WWE Night on July 25 and an alluring Brewers themed “boy band T-shirt” for Boy Band Night on August 22nd.

And just in case the two Christian Yelich bobbleheads announced last week weren’t enough for you, Superman Night on Sept. 5 will allow you to snag a third where the former MVP is dressed as the hero’s alter-ego, Clark Kent, for a bobblehead.

If pop culture-centric Theme Nights aren’t your thing, a Cerveceros replica jersey is being offered for Cerceveros Day on June 13 and a Brewers Pride fanny pack for Pride Night on June 22 among other Community Nights.

The full list of Theme and Community Nights can be found below.

Wednesday, June 10 – Bark at the Park | Brewers Dog Toy (Tickets can be purchased for Dogs as well)

More information regarding the theme and community nights can be found here.

And if you’re wondering what we think are the best years for Brewers giveaways for the past decade, you can find that here.