Checking in to Justin Vernon’s new hotel, The Oxbow

Checking in to Justin Vernon’s new hotel, The Oxbow 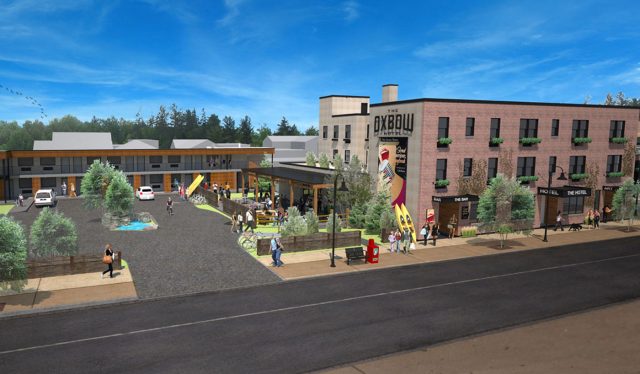 The boutique hotel is set to open this October

Justin Vernon is not only releasing a new Bon Iver album later this year. He will also help open a new boutique hotel named The Oxbow in his hometown of Eau Claire.  Located in downtown Eau Claire, The Oxbow will house 30 modern rooms, a restaurant & bar, and a music venue. The Oxbow is set to open this October.

A few weeks before the Eaux Claires Music & Arts Festival, I chatted with Nick Meyer about the new boutique hotel.

Tarik: First off, so, can you explain to me why you, Justin Vernon and other investors decided that Eau Claire needed this type of hotel?

Nick Meyer: I was on the Wisconsin Arts Board for about seven or eight years —which is kind of a state board that goes around working on art’s economic development — and we would go to all these different areas in the state and they’d always put us in kind of whatever cool spots there were in these towns. Whether it was Green Bay or Milwaukee or Madison or wherever. And I had been telling them [Arts Board] for years about all the cool stuff that was going on with downtown Eau Claire.

Because so many things were happening in the music scene, and in development. And so they said, “Ok, fine. We’ll come and do a tour of Eau Claire and we’ll do one of these trips.” They do like these three day things with a tour they go to all the different art things. They see what companies are doing and everything. It was always a really cool thing. So, I put together a whole tour for them.  When it came time to put them somewhere to stay, we didn’t have anything downtown. We had what the Oxbow used to be — a hotel called the Green Tree Inn which was a total dive. 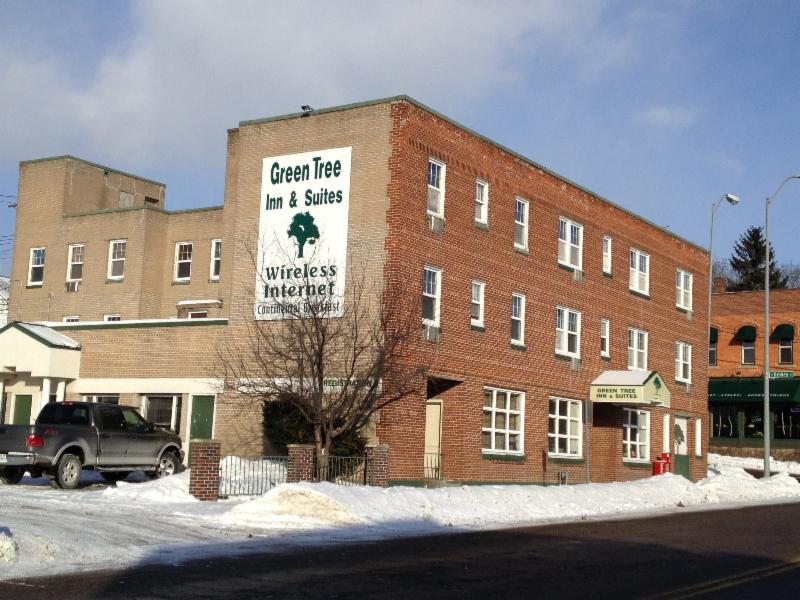 It was awesome in its heyday. Like when it was built in the forties, fifties, sixties it was like the place. But, in kind of the 90’s and 2000s, it was really not a desirable place at all. And then we had a Ramada that had just gone way downhill — it was a bad situation too so there was nowhere to actually stay downtown.  So I put them in this place up by the highway, which is a cool spot. But in the morning, I went down there and they were like, “Hey, why are we out here by the highway? You said all this cool stuff was going on downtown…what’s the deal?” And it was the first time as a local, the light bulb went off for me, “Oh hey, we have a problem here.” Because as a local, you don’t think a lot about hotels and where people are going to stay.

So, I realized somebody needed to do something about that. I knew nothing about hotels, but I knew pockets of different things and some of the right people to talk to. And this place is right across the street from our office at Volume One [A weekly arts & culture publication]. We’ve got a retail store. And right across the street was this Green Tree Inn which was just a disaster of a place.

So, I talked to Justin [Vernon] and he was way into the idea. We talked to some other people who had some different experience in different areas and we figured it was time for Eau Claire to have a unique place to stay — not just a chain hotel or some tick box hotel by the highway. We thought that downtown needed something that really kind of reflected the identity of this community and gave people the experience of what it’s really like to be a part of this place. So, that’s why we started working on it. That was three or four years ago at this point. We expect to open here by the end of the summer.

Tarik: What makes The Oxbow different from other boutique hotels?

Nick Meyer:  Well, I mean, it’s certainly way different than anything else here in the Chippewa Valley and in the Eau Claire market — there’s nothing at all like it. I don’t know how different it is from other boutique hotels but one big component to ours is obviously this restaurant-bar venue called the Lakely, which is a farm-to-table style restaurant and craft cocktail bar. Then, it has a stage that will actually be programmed quite a bit by Justin and his friends and the different musicians of this community.

We just had a programming meeting with Sean Carey and Justin about how they want to use the stage. We’ll have these nights where maybe Justin or Sean or anybody who’s recording out of a studio, can just pop in and spin records for the night. Or we’ll have a lot of jazz performances. There’s a big jazz scene here — Justin and Sean kind of came out of that jazz scene a little bit. So, it can kind of be a home for that.

And the restaurant part is — our chef, his name is Nathan Berg. And he had been in Madison for a while doing stuff. He had a couple different places up here. But, he’s been written up by the Journal Sentinel, Star Tribune out of Minneapolis, Relish Magazine and Chef Mag. He’s kind of our celebrity chef for this area.

He’s just a really super, down-to-earth guy who really knows his thing and has relationships with every farmer in the area. So, it’s going to be a really authentic kind of Wisconsin, Midwest-modern-food-thing. 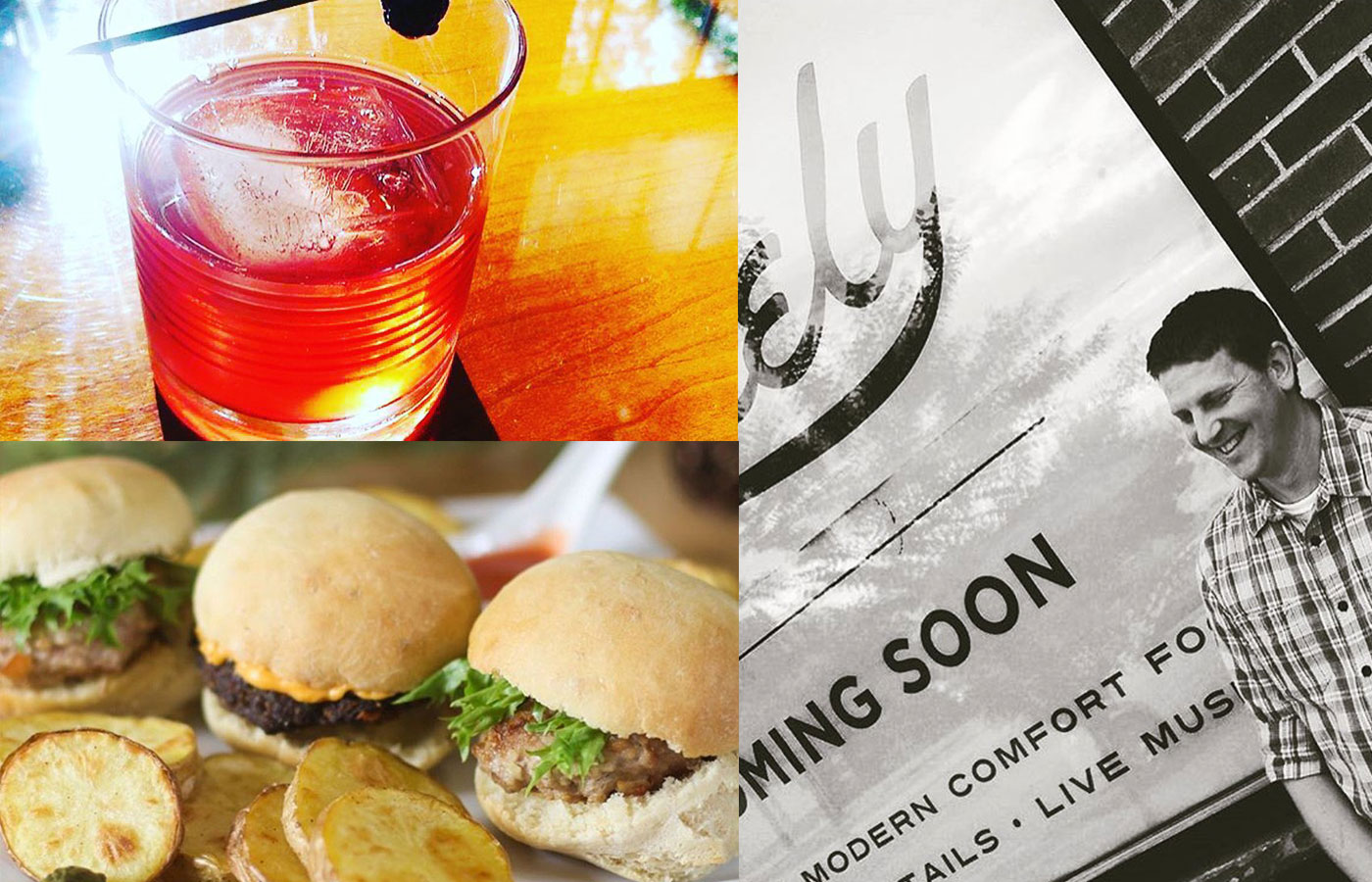 The Lakely and Chef Nathan Berg

We’re right on the state bike trail here so we’re going to have bicycle rentals, and kayak rentals — cause we’re right on the Eau Clarie river, it’s just like fifty feet away. You can rent tubes and ride the river here. We’ll have guided tours for things like that. It’s got a few more things going on than just the typical boutique hotel.

Tarik: Are you able to talk a little bit about the design concept? How involved were you and Justin Vernon in the design of the hotel and what inspired the design?

Nick Meyer:  Sure. We have the architects and the design team for this are one-half out of Eau Claire [SDS Architects and one-half out of Minneapolis [Shelter Architecture]. They have collaborated with us all along. Justin has been very involved in the whole process. I mean, he’s not just a silent investor who put some cash in and stepped away. He’s been very involved in the process. We wanted it to feel very “north woods Wisconsin” but a more modern and maybe a little more urban version of that.

There’s a lot of a lot of wood included in this thing [The Oxbow]. One of the cool things that we’re doing is, there’s a woodworker in town named Tim Brudnicki from Eau Claire Woodworks. He takes wood that has been brought down inside the city of Eau Claire — an urban wood that has to come down due to storms. Or they take out all those ash trees because there’s that Emerald Ash Borer bug that’s kind of making its way through Wisconsin.

They kind of preemptively take these ash trees down and plant new ones. Anyway, we’ve got all this different wood — walnut and ash and different trees that this guy uses from right inside the city of Eau Claire that we’re making a lot of the furniture out of.

Tarik: You mentioned about the jazz and I guess to be honest, I never thought of Eau Claire and jazz in the same sentence. What is the history or tradition of jazz in Eau Claire?

Nick Meyer: Well, I think — and don’t quote me — I’m fairly certain the biggest undergrad music program in the state is here at the Eau Claire branch of the University of Wisconsin. And we have a jazz festival here that’s been going on for fifty-plus years. There are students from all over the Midwest that come for this huge critique session. It’s kind of an academic session of these different jazz groups, jazz combos and bands of students.

Over the last, ten years or less, it’s expanded into the community quite a bit more. They closed down one of the main streets and all of downtown. There’s fifteen different venues that are packed with jazz and jazz-inspired performances. Bands from around here and from outside of here. And they bring in the top jazz players in the country that come to this festival to perform and do presentations for all the students from throughout the Midwest. And so there’s always been a lot of jazz around the area — there’s little pockets of performance here and there — but nobody’s ever really said, “ok we’re going to be the home of that.” And that’s kind of one of the things that were tossed around as part of our programming is to kind of try to be an anchor point for that scene and help that develop and grow and become more well-known.

But again, there will be other types of music as well. It’s not meant to be like a full, booming venue with the whole full-blown sound system. It’s going to be kind of a little bit more stripped back than that and just kind of authentic. More acoustic bass performance and stuff but there is there is a sound system there. But, the other thing is the  “vinyl nights.” There’s nobody really in this town that has been doing vinyl spinning DJ nights with featured DJ’s and things.

Tarik: Will there be shows and artist performing every night?

Nick Meyer: They’ll be something on the stage pretty much every day. And then there’s a separate room, too. There’s another private room that we’ve been talking about doing like re-scores of Twin Peaks and just weird stuff like that. Where you know someone’s playing piano and drums and you’re watching old movies and getting a new fresh score to the films. Just weird, fun experimental stuff like that. Justin and his friends are all excited to do.

Tarik: I heard that there will be record players in every room. Is that true?

Nick Meyer: Yeah. So, there’s going to be a vinyl library in the lobby. If you’re staying at the hotel, you can go down there and pick out a couple records check them out at the front desk, and take them back to your room. You can even take them home if you want. They’d be just added to your bill or whatever.  The music scene of this area and music in general, is something that is a thread that runs through the whole property — along with that outdoor aesthetic. The rivers and the trails and the north woods and stuff like that.

Tarik: Cool. I’ve also read about this Artists in Residence program. What is that all about?

Nick Meyer: Well, as you may have read about, we kind of X’d that out. We kind of ran out of space. We were trying to get too many cool ideas into this tiny little place. So, there is an art gallery. It’s our meeting room — the same room where you do some of this film screening. It’ll have rotating shows be in there as well as some art in the upper levels of the main building.

There’s still a lot of visual art. Another program is — we’re going to be commissioning roughly ten artists to make prints specific to the concept of the hotel. And then we’ll produce those and those will be hanging in all of the rooms, too. Those will also be for sale in the lobby. So, a bunch of commissioned work to create screen-print posters that evoke the sense of the place.

Inside the Oxbow Hotel 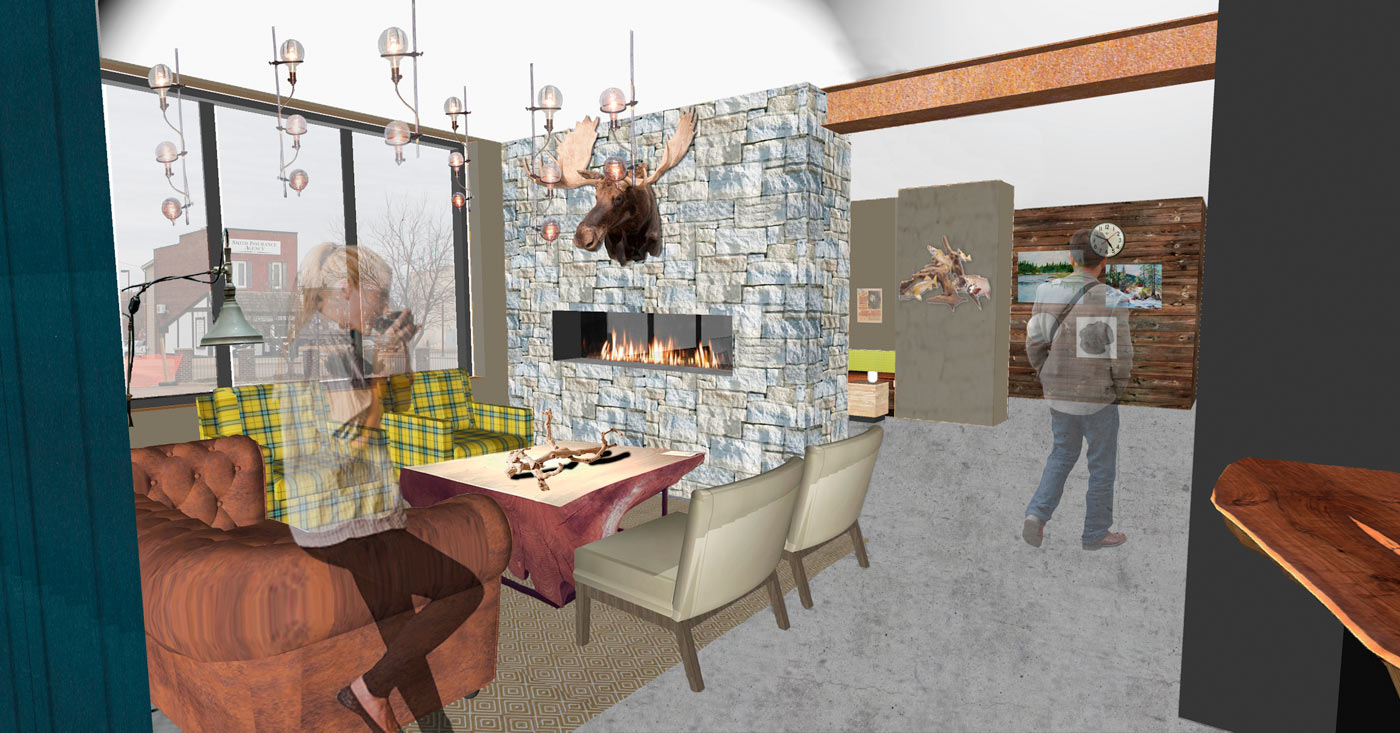 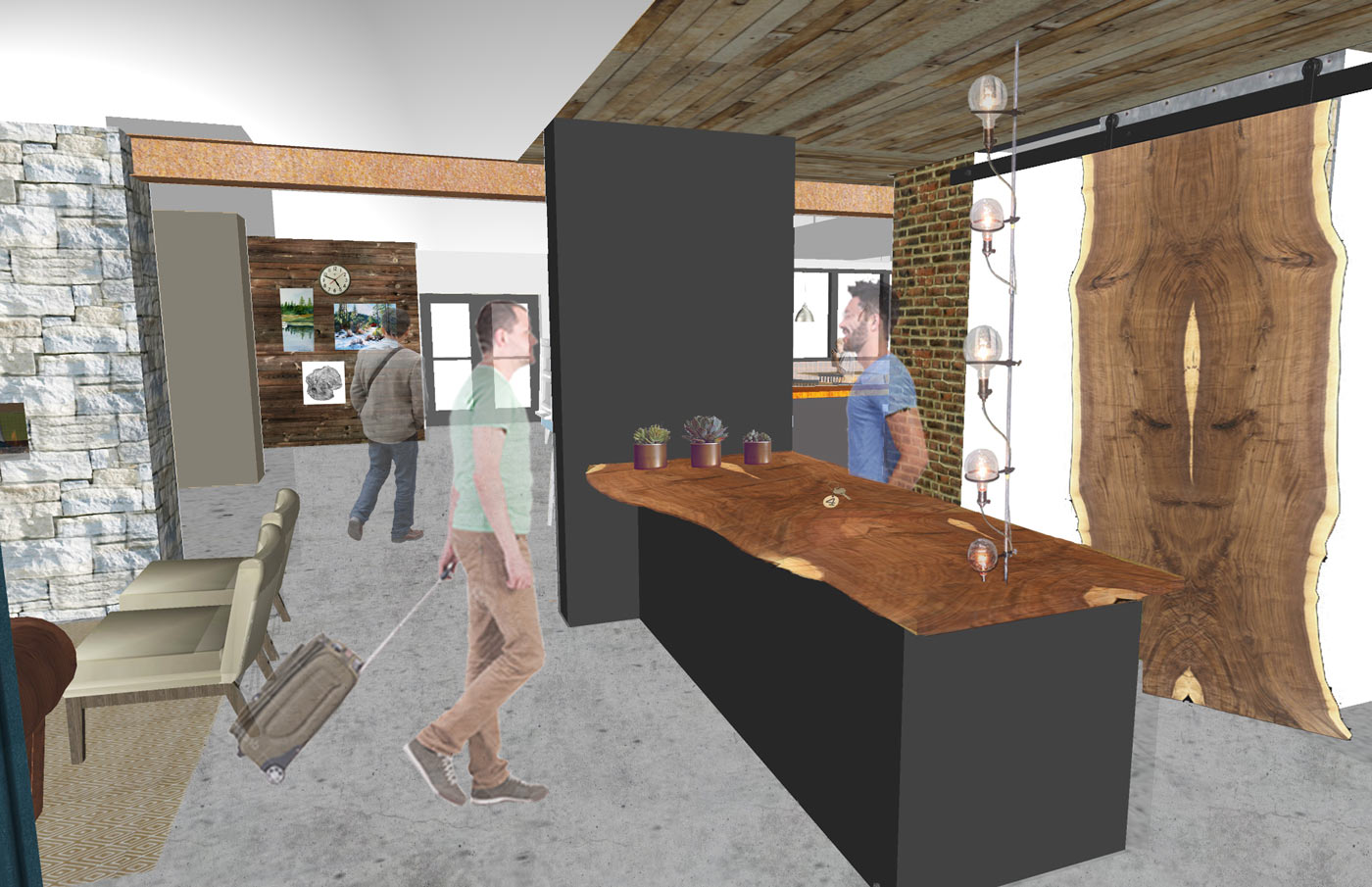 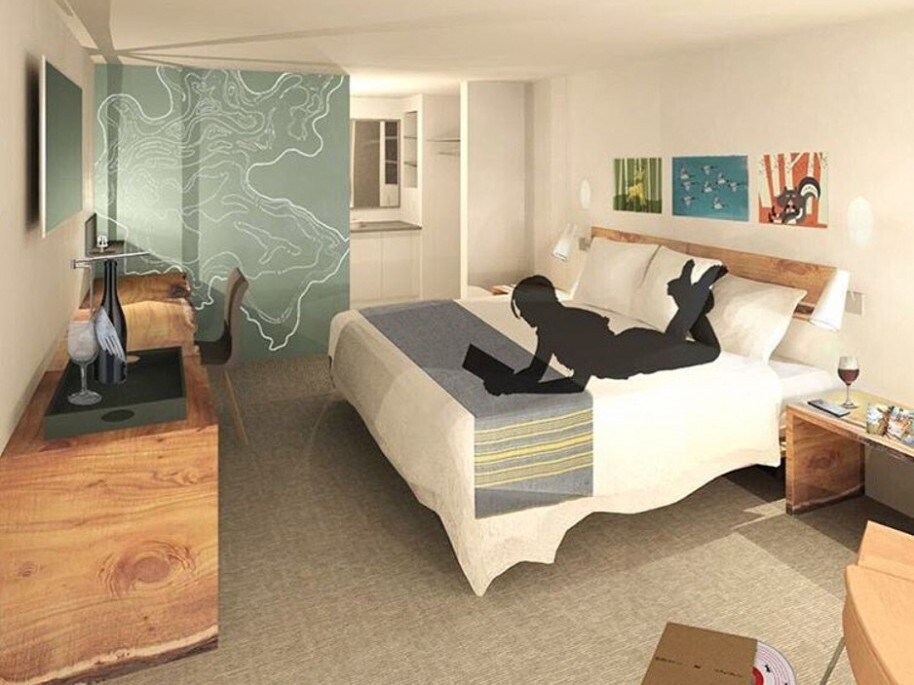 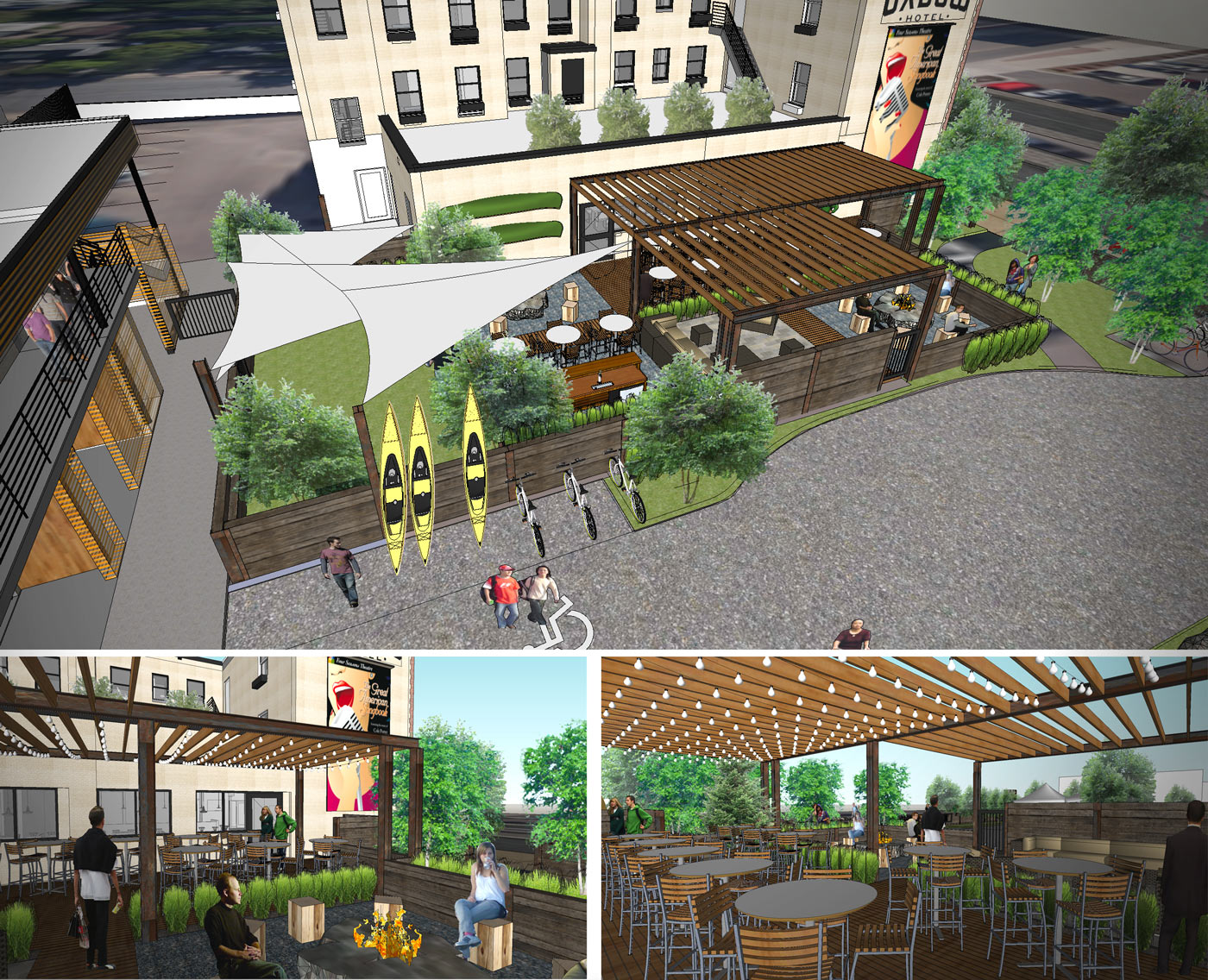