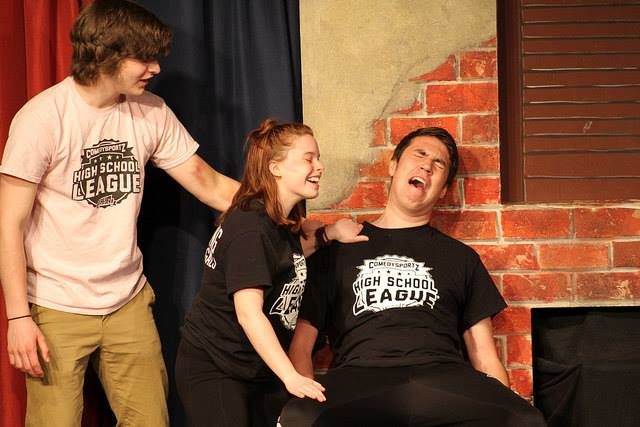 Comedy Sportz started in Milwaukee in 1984 and the high school league has been around since 1986. There are now 30 Comedy Sportz locations across the globe and matches are played in 24 cities.

The goal of the Comedy Sportz high school league is to give students an alternative creative outlet and to encourage all teens to come out of their shell and feel more comfortable. The organization also prides itself on teaching students skills that will help them on stage as well as in their day-to-day lives. And just like any other team sport, there are opportunities to step up, like to become a team captain.

“It gives students who have been here before the opportunity to be in a leadership position,” says Liv Shircel, a Comedy Sportz Milwaukee high school league coach and a player/referee.

But the captain also has the ability to strategize.

Shircel says team captains have the responsibility of choosing which “game” will be played. So, they must keep certain things in mind like, “What are the strengths of my teammates, what are some of their weaknesses and how can we play the best match keeping those things in mind?”

Before the season begins, all students are required to participate in roughly eight weeks of training where coaches teach them various improv skills as well as dozens of the different “games” they will use in the matches. After training, students get involved in matches and tournaments.

One game students learn during training is called “Weekend at Bernie’s.” This begins with one team of three acting out a simple scene. After the scene is over, the crowd votes to eliminate one of the three team members. The team of three must then redo the same scene. But this time, the two players who remain must puppet the eliminated player’s body. The scene is played a third and final time with just one remaining team member acting as the puppeteer for both of the eliminated teammates. The final player must move the other players’ bodies and their mouths and speak for them.

The winner in this game is decided by the referee, while others are judged by the audience members.

“Blind Line” is a game where one team of three leaves the stadium and the other team prepares several notes for them. While asking for various quotes, characters and locations from the audience, the team jots down answers on pieces of paper. The papers are folded and dispersed across the stage. The other team then returns to the stadium and acts out a simple scene but must periodically pick up the notes from the stage floor and find smooth ways of incorporating the notes into the scene.

Notes could range from a simple song title like “It’s Not Easy Being Green,” to movie or TV quotes such as “Dad, it’s time to go home now. You have to wake up.” Regardless of the note, the player must read it aloud and relate it to the scene.

Like any sport, Comedy Sportz referees are instructed to call fouls as well. One foul is known as the “groaner foul.” This penalty is called anytime a player makes a “dad joke” that makes the crowd groan. Any player who is called for a groaner foul must stand at the front of the stage and apologize for insulting everyone’s senses of humor.

Another foul, known as the “brown bag foul,” can be called on any player who says anything that the referee deems to be “rude, crude, lewd or straight up out of context.” Players who commit a brown bag foul must wear a brown paper bag with eye holes over their head for the remainder of the match.

Currently, all high school league matches are played on Saturdays at the Comedy Sportz stage on 1st St., but the goal is to expand it into the schools themselves.

The hope in expanding is to reach more students and offer this outlet to anyone who might be looking for it. Houston and Los Angeles have already adopted the new high school league format where schools buy the rights. Los Angeles is the most successful high school league city as they have over 75 schools involved.

“It’s something I wished was around in my hometown when I was growing up because I think it just fuels so much and teaches you skills,” Shircel says.

And after attending a match even I learned some new skills just from being in the audience. These high school matches are hilarious on so many different levels, and what Comedy Sportz is doing with the expansion of the high school league is unmatched.

Comedy Sportz is an organization that turns improv comedy into a sport by adding a referee and creating a competitive environment that mimics that of a high stakes sporting event. And while the group has plenty of adult workshops and other improv shows, it’s the high school league that is picking up steam and preparing to expand at the start of next season. It’s been around for over 30 years at the Comedy Sportz location, but teenagers will soon be able compete on improv teams for their individual high schools, practicing and competing at school like any other varsity sport.

I attended a Comedy Sportz Milwaukee high school league match and it did not disappoint. There are so many little things this organization is doing to create a unique sport out of improv comedy.