Electric scooters are set to return to Milwaukee, but for how long?

Electric scooters are set to return to Milwaukee, but for how long? 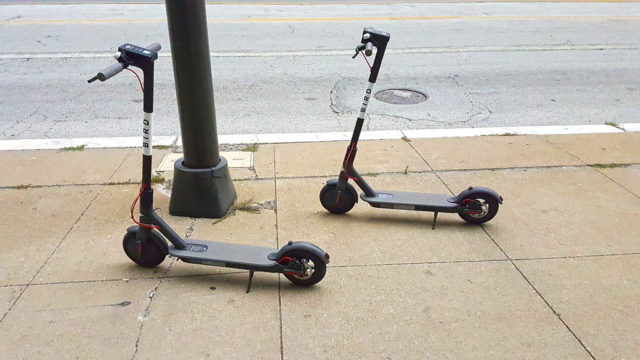 Bird scooters first appeared in Milwaukee last year, stirring debate about their safety and practicality, and concerns that the scooters were littering the sidewalks. The city sued Bird, arguing that electric scooters were illegal on city streets under state law, then reached an agreement last May that called for the company to bring the scooters back after a statewide regulatory framework had been adopted.

Now we know what that framework looks like. Under the state measure, scooters must weigh under 100 pounds and adhere to a 15 mph speed limit. Local governments will have the power to restrict rentals and prohibit use on streets with speed limits above 25 mph. Scooters must also comply with certain lighting and braking requirements.

“Electric scooters can improve access to low-cost transportation options, actually reduce single-occupancy vehicle use and can serve as the first- and last-mile solution to residents and visitors in communities all across the state,” Gov. Tony Evers said during a signing ceremony Monday at the Milwaukee Public Market.

So does this mean that the scooters are back for good? That remains to be seen. It’s up to the city to create its own electric scooter ordinances. The Common Council is expected today to approve an electric scooter pilot program that will outline how many scooters companies like Bird and Lime can introduce, and the rules that riders will need to follow. And whether that pilot program becomes permanent could depend on how the introductory period goes.

“In a perfect world, citizens who like scooters will acquaint themselves with the rules and will respect the rules,” Alderman Bob Bauman told TMJ4. “If they don’t, scooters will go away.”