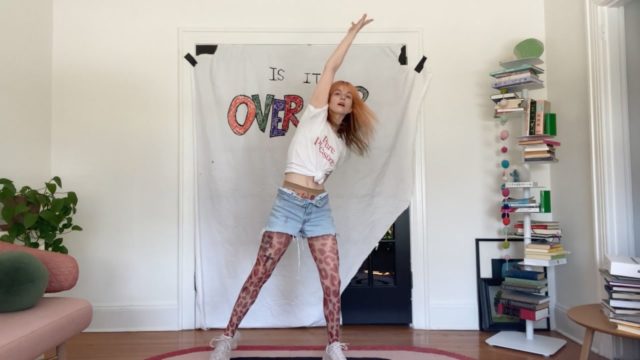 While I certainly feel lucky that apps like Zoom, Google Meet and Microsoft Teams allow me and countless others working from home to stay connected with their co-workers, it definitely isn’t a total replacement for traditional means of interaction. In the same vein, this holds true for most new mainstream entertainment released during the pandemic as well.

Although the novelty of jam sessions, SNL sketches, talk shows and more presented through the lens of a video chat was fun at first, the limitations are readily apparent and more often than not just remind me what we’re missing. What is more striking to me, is how artists are embracing being stuck at home to create something unique which would be impossible or overcomplicated under normal circumstances. And music videos are perfectly suited for this.

With the initial wave of music videos produced before the pandemic having passed, a new indeterminate era of “DIY” videos has begun. Of course the aforementioned “Zoom call” format is the most prevalent but some artists have taken to the challenge of creating something which is reflective of current circumstances but stand alone as creative and fun videos in their own right which will remain entertaining long after this has passed.

The following music videos are some of the best examples so far of this new trend and hopefully inspire you to create something yourself or give yourself a chance to return to normalcy while watching something new.

Hayley Williams – “Over Yet” [Workout Video]

Hayley Williams’ debut album, “Petals For Armor”, is already a perfect album for quarantine as it deals with emotions of anger, sadness, and hope which are all seemingly universal right now in equal weight but the track “Over Yet” is easily one of the records most energetic and optimistic. In comparison to the highly produced music videos which accompany the rest of the album’s singles, Williams decided to take the upbeat song (with lyrical content which has taken a new meaning in quarantine), and transform it into a nearly four-minute workout dance.

Filmed in one take, the workout fits the song surprisingly well and not only helps you to get some physical exercise but puts you in a better mental space as well.

As she explained on social media, Sophie Allison, better known as “Soccer Mommy”, was very much looking forward to performing songs from her new album “color theory” in front of fans before the pandemic postponed the tour. To make up for this, five virtual tour video performances were posted to her YouTube channel on May 7th with 8-bit, video game versions of her and her band performing the song “crawling in my skin” at stops in Minneapolis, Chicago, Austin and so on.

Moreover, the Soccer Mommy tour site offers downloadable versions of the band members so that fans can create their own “tour video” for their city. Implementing an even greater local touch, the site also offers options for fans within the virtual tour stops to buy her record from local record stores to support them during this time.

Rich Brian’s “BALI” video is something of an offbeat quarantine version of Drake’s viral “God’s Plan” music video. Whereas the Canadian crooner gave away $1 million worth of money and gifts to the residents of Miami, Rich Brian spends his video sending gifts to friends and fellow artists such as Thundercat and Denzel Curry via a drone air package and in turn sees them donate money to Los Angeles based hospitals, charities and families in need.

This video is clearly the most produced of this list with gorgeous drone footage of LA, but also comes with the greatest sense of community through the “pay it forward” mentality which permeates throughout the narrative. This not only helps to ground the video’s message — which is disconnected from much of the lyrics — but makes the video a timely reminder of how effective a small gesture can be.

Although not a traditional music video and instead a “live” performance, Tame Impala’s Late Show performance of “Is It True” might as well be with its studio quality sound and simple but compelling visuals.

Given that Kevin Parker writes, records, performs and produces all of Tame Impala’s music in the studio anyways, this video is an exciting glimpse into that process. He plays bass guitar, lead guitar and sings in different outfits across three panels under flashing, technicolor lights which create the psychedelic effect of a true “one-man band — befitting of the music and Parker’s creative process.

Created via a traveling green screen which went from each band member’s house and filmed on phones, 5 Seconds of Summer’s “Wildflower” music video is perhaps the most serendipitous creation to come out of quarantine.

The creative process of bringing together four completely disconnected reels of footage resulted in an opportunity to embrace the 80s/90s tone of the synth-pop song with visual noise, VHS effects and hand-drawn animations reminiscent of a classic MTV music video. Director Andy Deluca described it in an “Alternative Press” interview as a “music-video-themed music video”.

The resulting piece ditches any notion of being produced within California’s shelter-in-place order and is beautiful, nostalgic and addictive.