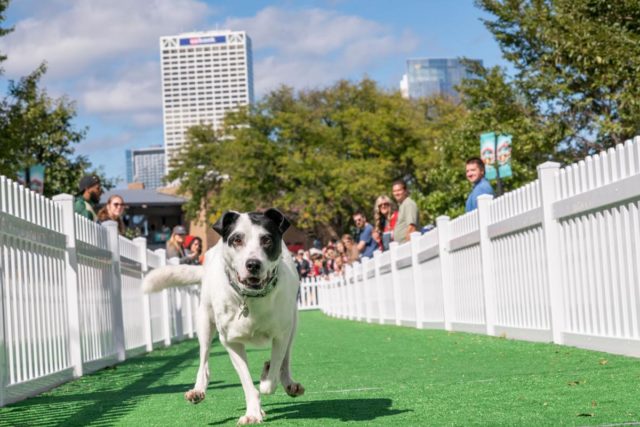 For years Milwaukee County’s Cool Waters Aquatic Park closed out each summer with an event called Doggie Dip. On its final day of operation, the park opened its pool to dogs, letting them have free rein for a few hours before the pool was drained for the season. Humans weren’t going to be using it anymore, so why not let the dogs have at it?

That same logic seems to be the animating idea behind Fromm PetFest, which returns for its sixth year at the Summerfest grounds on Saturday, Sept. 21. For eight unhinged hours, hundreds of dogs run wild over the festival grounds, barking, frolicking, peeing where they should not, tangling their leashing, toppling bowls of drinking water and generally having the best day of their lives. It is chaos, and it is wonderful. As a dog owner, there’s no greater sense of accomplishment than wearing your dog out. And every dog who leaves PetFest is very, very worn out.

Attractions include an agility course and a very popular lure course, where dogs trip all over themselves in pursuit of a flag that cannot possibly be caught. There are also speed trials for dogs who love to sprint, and an entertainment stage with demonstrations from stunt dogs, including returning favorite Noodles the Wonder Dog. He’s appeared on “Good Morning America” and knows all kinds of tricks. He plays a toy piano and sometimes he wears a hat.

That’s all super fun, but by far the best spectator sport is the dock diving, where average dogs see if they can muster the courage to plunge into pool in pursuit of a coveted tennis ball. There should be an entire ESPN channel dedicated to this. When a seasoned dog dives, it’s a thing to behold: a showcase for canines at their proudest and most graceful. You can see some video of those dogs in action here.

But in truth most dogs are not seasoned divers, and the typical dive looks a lot like the video below: a clumsy inner struggle as a dog works up the nerve to leap into uncharted waters. Some chicken out. Others have to be coaxed in. Seemingly brave Labradors falter, while unlikely toy breeds rise to the moment. It’s a beautiful thing, watching a dog overcome its fears and claim its reward, as a supportive crowd roars with encouragement and applause.

Cats are welcome to, though in truth there aren’t many of them. The few that do make their way in (often on strollers) look either completely indifferent or mildly irritated. One year I met a local celebrity cat named Dexter the Therapy Cat who gave me his card (well, his owner did). He seemed like a pretty ordinary cat.

If you don’t have an animal to bring, you can adopt one at the festival’s Adoption Avenue, where more than two dozen area rescues displays their most eligible animals, including plenty of puppies and kittens and specialty breeds. Visit with caution: This is a great resource if you’re in the market for a pet, and a potential danger if you are not.

Fromm PetFest runs from 10 a.m. to 6 p.m. on Saturday, Sept. 21. Admission and parking are free. If you haven’t been before, it’s really worth making the effort. Winter is long and your dog deserves this.