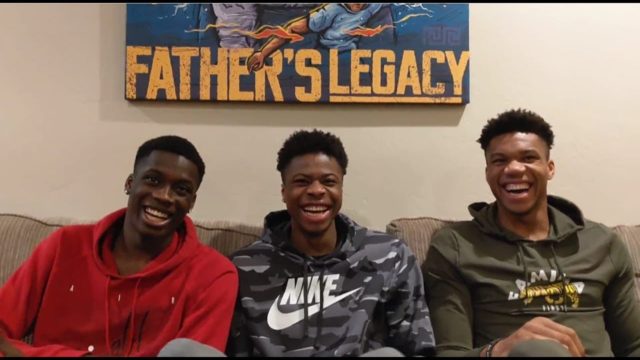 Despite being an international basketball superstar, Giannis has gained a reputation for being a very private individual.

This is understandable given that he is a folk hero in not only Milwaukee, but in his home country of Greece and due to his family’s Nigerian roots — Africa. However, in a recent panel discussion during the 2020 All-Star Weekend with President Barack Obama, Giannis explained that this privacy also comes from his time living in Greece out of fear for his family’s safety due to his parents being illegal immigrants. Recognizing his aforementioned hero status, President Obama encouraged the Greek freak to be “…a little more public” in order to set an example for others.

Giannis clearly took this to heart and after the NBA season was suspended in mid-March, took to Twitter and pledged to donate $100,000 to Fiserv Forum workers who were affected by the stoppage — leading to the entire Bucks roster pledging to contribute as well. But, one of the more surprising ways in which Giannis is growing his presence and setting an example is through a family vlog and growing brand: AntetokounBros TV.

Seeing regular uploads since December 2018, the channel pledges to share the Antetokounmpo family’s “funny moments and life journey” with viewers and features Giannis and his basketball-playing brothers: Thanasis, Kostas and Alex.

The videos consist of unboxings, basketball highlights, video game livestreams, reactions and vlogs. Everything is subtitled in either English or Greek depending on which language the brothers are speaking and it’s clear that not only is this endeavor intended for fans in the US, but those abroad as well.

And yet, in spite of this global reach and an impressive 159,000 subscribers on YouTube (the Bucks’ official channel has 193,000), I have yet to speak with a Bucks fan who is aware of this channel. Radio Milwaukee’s resident Bucks superfan Justin Barney didn’t even know what I was talking about when I brought it up. Even my own discovery of it was seemingly accidental as it appeared in my wife’s YouTube recommendations before she told me about it.

It’s a shame that the channel isn’t more well known given the insight it provides into an inspirational family like Giannis’ but if there was a time to dive into Antetokounbros TV, it would be now.

Giannis’ connection with his brothers is full of love, humor and playful jabs and each video showcases this through anything from streaming NBA 2K20 to a game of HORSE. At a time where seeing loved ones who you share these same connections with is almost impossible, seeing these moments is a reminder of what we will eventually return to and could even serve as an inspiration for what to do once this is all over. Further, many videos are shot in and around Milwaukee, in turn providing a glimpse into both the city itself that we can’t currently explore but how Giannis and his brothers live in the city.

Moreover, given the lack of an NBA season which the Bucks were riding on top of (having already clinched a playoff spot), the vlogs following the brothers to the 2020 All-Star game and the team’s January trip to Paris among others help to scratch the Milwaukee sports itch, even a little. These offer exciting new perspectives on some of the most electric games of the 2019-20 NBA season while featuring cameos from fan-favorite players Brook Lopez, Pat Connaughton and more.

While I would of course rather see Giannis leading the Bucks to the NBA Finals right now, seeing him and his close-knit family invite viewers to share laughs and experiences with them when quarantined certainly helps and along the lines of what President Obama was talking about earlier this year.