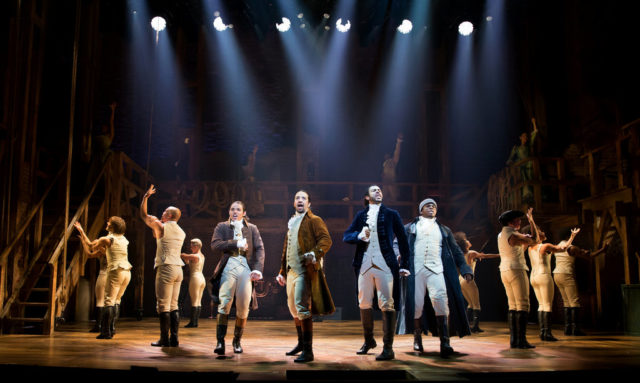 Hip-hop and history combine in hit, and soon to be Tony-winning, Broadway show

“I’m actually working on a hip-hop album – a concept album – about the life of someone who embodies hip-hop… Treasury Secretary Alexander Hamilton.”

This is how Lin-Manuel Miranda introduced his first public performance of a “Hamilton” song May 12, 2009, which he executed *at the White House in front of the President.*

He was invited to the East Room that night to perform a song from his musical “In the Heights” for “An Evening of Poetry, Music and Spoken Word” program. Instead, he did this:

Do you need a second? Cool, me too.

The Tonys are this Sunday (7 p.m. CST on CBS) and I think a lot more people are going to be watching this year. Which is great for a lot of entities – CBS, “Hamilton,” the Tonys – but beyond awards and ratings and the cheesy, but hilarious opening number we know James Corden will deliver, it’s an astounding accomplishment.

Eyeballs of all kinds of people are going to be turned to the same screen. And they’re not going to be watching football.

They’re going to be watching and crossing their fingers and cheering for a show that celebrates an immigrant coming to this country and shaping our nation, even though they may not support a path to citizenship and may have slept through every day of history class.

They’re celebrating a show that is self-described by its creator as “a love letter to hip-hop,” even though they may detest Kendrick Lamar.

They’re celebrating theater, even though they may have never seen a musical in their lives.

This show – all 46 songs, 2 hours and 55 minutes of it – combines history, hip-hop and theater flawlessly. And, in doing so, creates a common ground between people who enjoy any combination of the three.

In a September 2015 interview with Grantland, Miranda described his writing process as follows, “It’s interesting, I think of it as, ‘What’s the thing that’s not in the world that should be in the world?’”

There are a lot of ways to answer that question. Miranda chose to write a hip-hop musical about Alexander Hamilton.

How will you answer?

(Don’t throw away your shot.)

If you’ve gone #Ham4Ham or you’re interested in reading more about the revolution, below are some recommendations:

And for those of you still not convinced “Hamilton” is worth your time, please see the following list of stats:

Finally, if you’ve read this far and haven’t listened to the album yet, do yourself a favor and click here.

And if you don’t know, now you know.