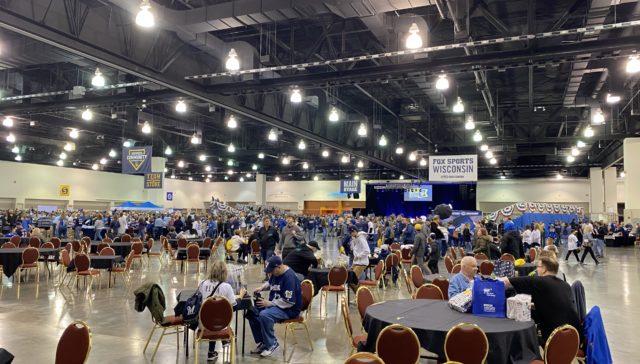 Yesterday, while our Music Director, Justin Barney, was attending the 62nd Annual Grammy Awards, I was attending an event of near equal prestige: Brewers On Deck.

The annual fan event returned to the Wisconsin Center for a day filled with interactions with players both veteran and new, interviews, game shows and plenty of freebies (I now somehow own six more Brewers themed bags).

It’s an event which celebrates both the past and the rapidly approaching future — pitchers and catchers report to Spring Training in a little more than two weeks and opening day is a mere two months away — and if you’re a fan of the Crew you’re bound to find something of interest given how so much is happening at once.

In my case, I spent most of the day returning to the main stage where players and management were interacting with one another all day as what appeals most to me is the insight into the team I’m preparing to spend another summer with. And there was certainly insight to be gained, both consequential and irreverent.

Thus, below are five of my takeaways from Brewers on Deck 2020.

The Brewers roster at the moment is nearly unrecognizable compared to what it looked like at the end of the 2019 season. While veteran stars like Yelich, Cain, Braun and Hader have remained, the transaction heavy offseason has drastically altered both the offensive and defensive landscapes.

In spite of this, the “Meet the Management” panel saw nearly everyone in charge of the team make it clear that their expectations for the team’s success going into this year is just as high as last (if not more). Manager Craig Counsell and general manager David Stearns clarified this by explaining that they’ve been creating teams that have given them a shot at going to the World Series the past three years and think it’s just a matter of time before they break through.

Although a cynic may denounce this as just “keeping face,” it’s hard to argue against them when the team has made the postseason the past two seasons and was one game short of it the season before that. Further, of all the changing pieces, the team has a healthy Christian Yelich, reliable All-Star pitchers like Josh Hader and Brandon Woodruff, and promising new signings.

Which brings us to…

4. The “new guys” will surprise

In the same “Meet the Management” panel, the managers fielded questions from the audience and a common point of discussion was the aforementioned player turnover from last year. To quell these fears, Stearns asserted that while new players like outfielder Avisail Garcia and catcher Omar Narváez may not be the “big” signings people were hoping for, these “under the radar” signings are going to make an impact.

Stearns proceeded to explain that both players are at a sweet spot in their careers where they can provide a lot of bang for the Brewers’ buck and also contribute to a pre-established “culture.” This culture was described as key to the teams success as it “inspires players to succeed” and strives for winning.

Korean Baseball Organization MVP Josh Lindblom was also brought up as another signee who they expect to deliver big results — similar to fan-favorite Eric Thames who likewise came from Korea and provided three solid years for the team.

3. “Brewers Face Off” is a showdown where memes are born

For the second consecutive year, two teams of Brewers players took the main stage to play their own version of the classic game show “Family Feud.” Coined as “Brewers Face Off,” this year the “Pitchers” went up against the “Hitters” and despite radio broadcaster Jeff Levering taking the place of Steve Harvey as host, the same amount of chaos as the televised version ensued.

For each question, one hundred Brewers employees were surveyed and ranged from “What is a common nickname for a home run?” to “Name a popular boy band from the ’90s.” The latter prompt presented perhaps the funniest moment of the game as relief pitchers Josh Hader and Corey Knebel were absolutely stunned before answering “Nickelback” and “The Jackson 5” respectively. Here’s hoping Hader takes the mound to the sounds of “Photograph” once the season starts.

Another highlight came in the form of “What is a popular type of cheese?” which saw Brewers icon Rollie Fingers confidently declare “VELVEETA!” and Gold Glove recipient Lorenzo Cain threaten to leave the stage after it was revealed that neither “pepperjack” or “parmesan” were on the board.

2. Ed Sedar and Pat Murphy are a comedic powerhouse

While not as wall-to-wall bizarre as “face off,” “Brewers Game Night” saw three teams of two play common party games “Taboo,” charades, and “Pictionary” for nothing but bragging rights and the audience’s amusement. None of the teams were particularly good but there was a team which certainly stood out: third base coach Ed Sedar and bench coach Pat Murphy.

Having won the game night last year, both men walked on stage with an aura of cockiness to them and within seconds, Murphy was jokingly picking a fight with an audience member and mocking Brandon Woodruff’s home state of Mississippi while Sedar seemed exhausted already of his partner’s belligerence. What followed can only be described as two good friends being as obnoxious as they could be in the best way possible.

Between Sedar constantly giving hints to the other teams and Murphy arguing with Jeff Levering regarding the arbitrary rules, the two were equal parts “straight man” and “wise guy” as they consistently drove the 1,800 person crowd to laughter.

In contrast with the management panel on the same stage, both “game shows” had very little in the way of insight into the game but in its place found insight into the players and coaches relationships. This is a group who act like family and welcomed the attendees into that family while on stage — and that was a treat to see.

1. The fanbase is as passionate as ever

I remember when last year’s Brewers On Deck sold out thinking, “I wonder how long this excitement will last?” and it turns out the answer right now is: “Not any time soon.”

The event sold out again this year and was packed to the brim with fans of all ages. In my five hours there I never saw an autograph or photo line empty, the team store was filled constantly, every main stage event became standing room only and talk of a World Series championship was everywhere. If you were completely out of the loop, you could think that we even won it all last year — the energy was that palpable.

Brewers On Deck isn’t for everyone and I’ll admit that you have to be a pretty dedicated fan to enjoy an event like this but if you are one, you certainly won’t be alone.